Dra. Vicki Belo grants interview with Boy Abunda for the first time after their conflict 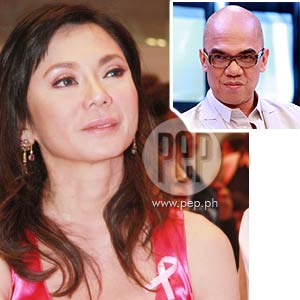 An excerpt of Boy Abunda's (inset) interview with Dra. Vicki Belo: Boy: Despite the denials, marami pa rin ang nagsasabi na you're together with Hayden. What is the truth? Vicki: We're not together. But if you're asking me if I'm in love with him? Am I going to be with him? Do I see ourselves spending the rest of our lives together and going to watch the sunset and we will have a wonderful

Boy: Let's talk about all these things that have been happening lately. Binabasag mo ang iyong katahimikan for the first time. Let's go back to December 9. Is it true that Princess [Velasco, girlfriend of Bistek del Rosario] went to your house to confess that she had an illicit affair with Hayden?

Vicki: Yes, Princess came. Actually, what happened was, when I was in Las Vegas, we were watching Manny Pacquiao [fight against Oscar dela Hoya], kami ni Hayden, when Princess called me. And then she said, 'Doktora, I have to resign immediately [from Belo clinic].' So, the moment I arrived in Manila, I immediately called her up and asked her to come to the house.

Vicki: This was December 9. So, she came to the house and she said, 'I have a confession to do. I've been having an affair with Hayden.' And then she goes, 'I'm not the only girl. There are more girls, if you want to know more about it.'

Boy: So, from December 9 to December 12, nasaan yung mga boxes?

Boy: And he [Hayden] was in the hospital.

Vicki: I was worried about Hayden. I was confused. I was crying.

Boy: How about the videotape?

Vicki: Well, it wasn't there. So, okay, I wanted to open it. I asked one of my IT people to come in to open. And we were able to open a couple of computers. Because it was the hard drive that we couldn't open. And then she said, 'You can't open that.' 'Why?' 'Because it's password protected.' And then Erik (Chua) called me the next day. He was telling me, 'Are you okay? Are you fine? Were you able to open the computers? Did you check if you have your videos there?' Sabi ko, 'Erik, wala, e. Just this one thing, this hard drive, but it's password protected, and we can't open it.' Then he said, 'Don't worry, I know somebody who can open anything.' So, Erik arrived at about 5:25 in the afternoon. Then the other guy arrived at 6:05. I had a dinner date at night. So, from 5:25 to 7:25, two hours na po ito. And then he [Erik] told me, 'Sige, leave us na. You go to your dinner na. Kami na lang.' And then I said, 'Can I trust you?'

Boy: Did you say that?

Vicki: Yeah, I did. And he said, 'Vicki naman...' And I said, 'Okay, swear on your mother's life.' Because to me and, you know, how sacred it is to you and to me. 'Swear in your mother's life na Erik pag nakita mo yung video ko i-delete mo lang. Then okay na tayo.' At the back of my mind, siguro hindi na nila mabukas ito. Ang tagal-tagal na namin, hindi naman nila mabukas. Then, tapos na kaming mag-dinner. As we were leaving the restaurant, takbo naman itong Erik. 'O, eto regalo ko sa iyo.' And I said, ano ito? Me? And he said, 'No, it's not. It's the others.' And hindi ko naman na-get masyado yun. So, okay, thank you. Nilagay ko sa bag ko. Pero I wasn't... Since I was only expecting mine, I really didn't know what that meant.

Vicki: I went home. And the next day, I watched the video and had the shock of my life. My God, I was just... You know in the beginning, it's like dancing lang. That was bad enough. And then it goes on to other things na. Parang hindi ko na... You know the feeling is talagang shocked. Wala, so the DVD, brineak ko. And since Erik left the hard drive in the computer room, tinapon ko, hinagis ko sa semento, tinapon-tapon ko.

Boy: Vicki, Katrina and company want your license revoked. What do you want from Katrina?

Vicki: I was shocked when she asked for that. Number two, she was saying malpractice. Malpractice means if somebody was injured or there was a bad result. So, I met with her in Serendra again, the famous Serendra, I met with her at Chelsea's. And I asked her, Katrina were you having an affair with Hayden? And she looks at me and she goes, 'Doktora, no! Never!' And then next,Okay, let me ask you again? I just want to hear it from your mouth.' So, yun she said, 'Oo, doktora, sorry, sorry.' Ganun lang. 'Parang ano lang kasi ako, you know, na-tempt or whatever. I'm only human.' Yung mga ganung style.

Vicki: Humingi naman. Humingi naman ng tawad. But you know, this is why I'm really upset about what's happening now. 'Coz when she made me hingi ng tawad and she admitted that she had an affair with Hayden, I forgave her.

Boy: Are there moments, when you're alone when you feel guilty to your children because they've been dragged?

Vicki: Yes, that's my biggest regret. My other regret was my mom who is 80 years old.

Boy: What does she know?

Vicki: She knows everything.

Vicki: She was asking me, 'Vicki, did you have a sex video with Hayden?' I want to die.

Boy: Despite the denials, marami pa rin ang nagsasabi na you're together with Hayden. What is the truth?

Vicki: We're not together. But if you're asking me if I'm in love with him? Am I going to be with him? Do I see ourseleves spending the rest of our lives together and going to watch the sunset and we will have a wonderful relationship?

Vicki: To Cristalle and Quark, I really love you two. I'm so proud of the kind of human beings you have become. Thank you so much for supporting me and loving me, and defending me. Kahit na nakakahiya na the mother should defend her children. But you're doing such a great job in defending your mother.

Boy: To your parents?

Boy: And the mirror is still there, what do you want to tell to Vicki Belo?

Vicki: I think you're a good person. You just made stupid mistakes sometimes. But you know, you're right, I'm a work in progress. And I would learn from this and someday, I will be a better person. And I will be able to help more people.

May mga nagte-text at nagtatanong nga raw kay Boy what happened with the interview with Vicki at ito ang naging sagot ni Boy: "Alam n'yo po mga kaibigan, this is a big world for all of us. You know, I said I continue to endorse Dr. Manny Calayan and Dr. Pie Calayan. This has nothing to do with it. This is an assigment, this is a job, this is an interview. Vicki is, was a friend."