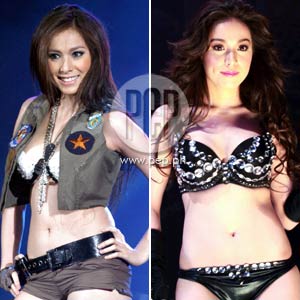 Last year (left) Cristine was a picture of anxiousness as she made her attempt to shed off the teenybopper image. This year, and as proven at the recently concluded FHM Philippines victory party, Cristine showed complete grace, enjoying her victory to the hilt as the country's sexiest.

What difference a year makes for Cristine Reyes.

Last year after finally agreeing to pose for the country's premiere men's magazine to bolster her image reinvention, Cristine was filled with anxiousness as she bares skin for the first time in front of the camera. The presence of Cristine's elder sister Ara Mina—a seasoned sexy actress used to the demands of daring photo shoots—reportedly helped little to placate the young actress's nerves.

Cristine's tense demeanor carried over at the 2008 100 Sexiest Women victory party staged on July 17 at the World Trade Center in Pasay City. During a production number, Cristine struggled to loosen the pins on her outfit as her backup dancers rushed to help her with the task, buying precious minutes before the entire number officially rolled smoothly.

And just like everyone else onstage that evening, Cristine—despite carrying the distinction as the magazine's most promising find at the time—was just a welcome appetizer serving as prelude to the event's main attraction: Marian Rivera.

LIVING UP TO THE IMAGE. The FHM debut worked successfully as planned, helping shatter Cristine's bubblegum image, reintroducing her to the public this time as a matured actress willing to try her hand on touchy roles.

Following Cristine's coming out party came a number of projects tailor-made to bank on her newfound image. Even her transfer to ABS-CBN from GMA-7 was highly regarded as a welcome career move.

But nothing perfectly captured Cristine's daring image than the primetime series, Eva Fonda. Written by Pablo S. Gomez, Eva Fonda served as Alma Moreno's ticket to fame when she portrayed the lead role in 1976. The blockbuster hit likewise bolstered the popularity of the so-called bomba (sexy) genre in Philippine cinema.

The modern adaptation of Eva Fonda hopes to recreate the impact of the original movie version albeit minor to major restrictions offered in an overly accessible medium such as television. For those behind Cristine's career, they're hoping that the portrayal would provide the same kind of wonder it brought Alma's name.

And like its movie version, Eva Fonda's primetime TV foray was met with criticisms from some quarters who felt that the sexual theme of the story was too strong and unfit for boobtube viewing. Nonetheless, the series—perhaps owing largely to its controversial plot and content—became one of the network's most watched series.

THE ROAD TO FHM SEXIEST THRONE. When voting for the 2009 FHM Philippines Sexiest Women started, Cristine was among those touted as early favorites along with perennial luminaries like Katrina Halili, Iwa Moto and defending title holder, Marian Rivera.

When the results were finally out, even Cristine was caught with surprise.

Basking in the afterglow of her victory, Cristine showed surprising confidence absent the previous year as she answered questions from the reporters present during the luncheon event.

The obvious change did not escape the FHM chief, prompting him to say: "Yon ang gusto ko sa kanya e, medyo 'di mo alam kung anong lalabas sa bibig niya. In a way parang people can't get her off their heads. Sobra siyang deserving as all naman the past winners—very intelligent, sensitive and emotional at the same time."

At the victory party conducted on July 9, 2009 at the World Trade Center in Pasay City, Cristine sashayed her way savoring the adulation of the drooling male audience.

In the middle of the production number, Cristine couldn't help her emotion, turning teary eyed as she was elevated by the male dancers.

One year before, Cristine was shedding tears out of anxiousness totally uncertain of what the future holds for her career outside the teenybopper spectrum.

One year after and a confident not to mention sexier Cristine Reyes was wearing her heart once again too much on her sleeves—this time triumphant and every inch looking like a true temptress.