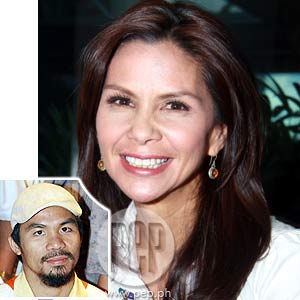 Manny Pacquiao really wants to be a politician, according to sports broadcaster Dyan Castillejo, a close friend of the world-champion Pinoy boxer.

The new IBO light welterweight world champion, recently announced his desire to become a congressman of Sarangani province. Critics hailed the move unreasonable, advising Pacman to stay out of the political limelight, because he would only be used by other politicians.

But Dyan argued that Pacman wants to run out of his free will, not because politicians are forcing him.

A recent fiasco involving the champ proves Dyan's closeness to him. Last January, rumors went around saying that Pacquiao's supposed transfer from GMA-7 to ABS-CBN was incited by the sports broadcaster, who was allegedly asked by the Kapamilya network to convince the boxer to crossover. (Click HERE to read related article.)

The issue has long ended, but Dyan still explained her side. "I just went there to cover. Kasi we heard the issue that he's moving. Kausap niya management talaga. I just went there to interview... Pero siyempre, it's perceived like that kasi I'm close to him, e."

HEALTH BUFF. Aside from interviewing athletes, the 43-year old TV personality loves being a health buff.

"My passion is health and fitness. I love to exercise, I love to eat healthy, I really eat mga vegetables. I'm always looking for ways to get healthy," Dyan explained.

The former World Tonight news anchor also takes a daily dose of sea and fish oil and Wheatgrass, a new product that helps her reach optimum health. One sachet of Wheatgrass, dissolved in a glass of water, is reportedly equal to a pound of vegetables.

Dyan also makes sure to balance her physical wellbeing with her spiritual practices.

"Exercise is my super stress-buster [but] I will not survive without prayer. I read the Bible daily, I go to Church once a week... that's where I get my strength."