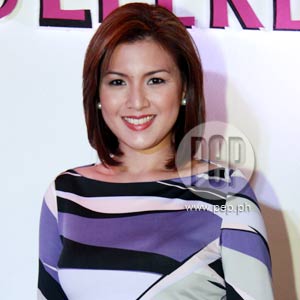 After several years of being away from showbiz, celebrity mom Bernadette Allyson now plans to go back to work. With her youngest going on two, "feeling ko baka this time puwede na ulit ako mag-comeback nang unti-unti."

Bernadette Allyson says she's planning to go back to showbiz after years of being an inactive entertainment personality.

At the press conference of her product endorsement, a direct-selling brand called Fullerlife, the former cast member of the defunct youth-oriented show Growing Up told PEP (Philippine Entertainment Portal) that she misses showbiz very much.

She said she left showbiz by choice to give priority to her family. "When I got married, hindi ko rin naman kasi plinano na I would have a baby right away. My plan is to get married and still be active in showbiz. Pero ang nangyari nga is I got pregnant right away so talagang napa-lie-low na talaga siya. It was a personal choice on my part kasi I want to be there while my kids are growing up."

However, since her kids have already grown a bit, Bernadette said this might just be the right time to take a chance on going back to showbiz. "Ngayon na medyo like my third one is one year old na going two, feeling ko baka this time puwede na ulit ako mag-comeback nang unti-unti."

She knows that when she comes back, her career wouldn't be as busy as it was before marrying actor Gary Estrada. She said, "I mean, I won't be as busy as I was nung dalaga na tipong wala nang tulog. Or yung lahat ng show, oo. Tapos meron ka pang mga provincial shows, may shooting ka pa ganyan. I don't think I can ever go back to how busy I was before.

"But for me to have a one regular show, or like guesting-guesting, or like this one, endorsing products, especially with them, bonding activity din namin yung pictorial, it would be fine. Supportive naman si Gary with these kind of things. I would make sure I still have enough time to be with them, hindi yung puro trabaho lang."

During the press conference, Bernadette still looked almost the same as she was before leaving the industry. "Ngayon nga, kasi parang ayokong bumalik na. There was a time that I was so big, kasi nga buntis ako dun sa pangalawa, tapos nabuntis ako agad sa pangatlo, so I really got so big I was, the time I was gonna give birth I was 190 pounds. So sabi ko, ayoko naman bumalik, ayoko naman mag-guest ako na ang laki-aki ko and makikita nila ako na, di ba, hindi maganda. So may mga conscious effort ako na 'wag muna magpakita or mag-lie low muna sa career."

Bernadette then added that she was encouraged to go back after seeing some of her batchmates in showbiz on television.

ON HUSBAND GARY ESTRADA. Bernadette also expressed her happiness for her husband Gary who was chosen to be part of the cast of the Pinoy adaptation of the Mexican novela Rosalinda. On the show, he plays the role of Javier, the father of Rosalinda (played by Carla Abellana).

The former teen star said that she was okay with Gary playing a father role.

On a different note, PEP also asked Bernadette if her husband has plans to run for a government position in the coming 2010 elections. It can be remembered that Gary ran for mayor in San Antonio, Quezon last 2007, but he wasn't fortunate to get the public's vote.

"Kasi kami, we pray about it. Kasi ako, kung minsan, kung ako masusunod, sabi ko ayoko, e, dahil mas magiging busy siya, ibang buhay na naman yun. Although it's similar to showbiz life, pero mas magiging exposed na kayo sa public. And you know, it would be a greater risk if you're a politician. But again, wherever he wants to go, I'm his wife, I'm there to support him."