TV5—Shaking TV viewing one year after 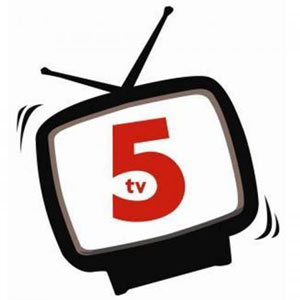 A year after overhauling its image and station name, TV5 rises to alter the Pinoy's viewing habits, as proven by the network's strong showing in the Mega Manila ratings survey.

But even the network executive was prone to moments of awe and "wow" as the numbers and percentages—boldly and clearly painting TV5's steady climb to the ratings summit in the past couple of months—were illuminated from the projector board.

"We're moving faster. We're moving in an escalating pace and everyone at TV5, we're very please with the uptrend," Evangelista told the entertainment reporters during a press conference held at Cravings restaurant, Shangri-La Plaza Mall in Mandaluyong City last July 30.

The "uptrend" was anchored largely on Ryan Agoncillo's Talentadong Pinoy, which as of late has shaken up the ratings survey in the Mega Manila area. Not to be outdone, the horror anthology series Midnight DJ and Vic Sotto's Who Wants To Be A Millionaire? are also asserting muscle in their respective timeslots.

TRANSITION PERIOD. When TV5 made the transition from its old station ID, ABC-5, last year, expectations were high yet greatly conservative. With the shadows of the country's two giant networks looming largely over the newly overhauled network, the prospect of shattering the longstanding "duopoly" looked remote.

The shift from ABC-5 to TV5 was made possible after the network entered into a long-term block airtime agreement with MPB Primedia, Inc.—a local group backed by a Malaysian media organization.

The tie up consequently allowed the network to beef up its programming, which consequently boosted its chances to compete against GMA-7 and ABS-CBN.

The network's new identity, coupled with aggressive promotion and interesting programs, immediately made an impression among viewers right on its first month of reinvention. But finding the right formula to success did not happen overnight as hits and misses shaped the network's journey in realizing its objective.

STEADY TURNAROUND. While the newly dressed network's target of shaking up the Pinoy's viewing habits was noble, some industry insiders raised eyebrows on its feasibility.

But the people behind the network were dead serious when they coined the slogan, "Shake Mo, TV Mo." TV5 continued targeting the young market and viewers who were tired of the usual boobtube fare offered by the more established networks.

It didn't take long before viewers took notice of the innovation. Soon, rating figures started ringing for all timeslots, with Talentadong Pinoy making the big leap to the top spot last July 11 with a rating of 26.2 percent.

"For Talentadong Pinoy, again it's one of our biggest shows, so we do want to maximize that. Magkakaroon kami ng marami pang pakulo within Talentado and outside. We can also like spin it off to a different program... but in Talentado, of course, hindi puwedeng paulit-ulit lang 'yan. There has to be something new each season and 'yan 'yong abangan ninyo," revealed Jasper.

The success of Talentadong Pinoy and the other programs encouraged the network's bigwigs to further intensify their campaign by strengthening all the timeslot brackets.

"Actually, let's say, for balance here, within that primetime slot weekdays, again we're gonna launch more sitcoms and that's in the pipeline already. Ang success factor kasi namin ngayon is more in the younger generation. So, younger generation, like kunwari Midnight DJ, it's in the suspense territory so we're gonna launch like another suspense-comedy show within primetime as well.

"On our late-night belt we just launched, actually Late Night Trip starts at 11:30. Mga limang shows po 'yan, iba-iba, a variety, we got cooking shows, we got motoring shows, we got gaming shows, so all that innovation happening in late primetime."

One year after overhauling its entire image, the TV5 team remains upbeat with the network's direction as dictated by the current viewing trend of the viewers. Even Jasper himself confessed feeling surprised with what they have achieved so far in such a short span of time.

"It is our commitment to the viewers to continually give them more quality choices in free-to-air television. This is what the partnership between Primedia and Associated Broadcasting Company hoped to achieve when we launched the TV5 brand a year ago and we're definitely on the right track.