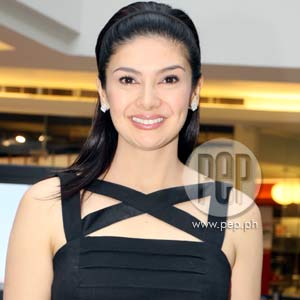 "I'm enjoying my vacation now. It's my first time to take a break in the past 17 or 18 years. I miss it, but I'm also enjoying this for now," says TV host Charlene Gonzalez who's taking a full break from television this year.

TV host-actress Charlene Gonzales never thought she would someday achieve her dream to study at Harvard University in the US.

Last summer, this dream came true when she got accepted in the short business course she applied for at the prestigious university.

"When I got the acceptance letter, it was quite abrupt na talagang kailangan ko nang umalis within two weeks time. And it was hard for me to leave my family during that time because it was during Holy Week at nakaplano na ang Holy Week. I had to leave Aga [Muhlach, her husband] and the kids. But since he knew it was my dream talaga, since before pa, pumayag siya," Charlene narrated to the media during the press launch of her new clothing endorsement, For Me, yesterday, August 7, at the SM Megamall in Mandaluyong City.

The former Binibining Pilipinas-Universe said that being at Harvard was one experience she would never forget in her life.

She excitedly described, "That was fun and it was an experience that I won't forget. Kasi, bata pa lang ako, talagang pangarap ko talagang... You know, growing up I wish I can go to Harvard but not knowing na puwede palang mangyari."

She recalled how she felt during her first day in school. She said, "I remember the first day when I walked around the campus. Even in a short span, talagang ninamnam ko talaga because when I walked in the campus, it was so nostalgic and I literally cried because I couldn't believe I was there—walking into the class, being with a global community with regard to my classmates representing countries from all over the world. It was really overwhelming and I was just in awe the whole time. I stayed in dorm, in campus, so it was really unforgettable."

Charlene said that her month-long study at Harvard was something that she would be able to put to use in case she decided to put up her own business. "I don't have a specific business that I'm thinking about yet. But in preparation for the future, you know, you'll never know what happens."

Her experience was also something that she could impart to her twins, Atasha and Andres.

She shared, "I think on a personal level, learning should never stop. And I think that's one of the best... This is true, when you're mind is idle, you age faster. You'll have a longer life when you continue to learn and grasp knowledge. So, it's something that I want to enjoy. I want to stay young forever, di ba?"

AGA'S UPCOMING PROJECT. Since Lea Salonga came back, many have been hoping to see her with her former onscreen partner, Charlene's husband Aga Muhlach. These two actors have successfully worked together in two movies, Bakit Labis Kitang Mahal (1992) and Sana Maulit Muli (2005).

Charlene said she wouldn't have a problem with that. In fact, she commented, "I'd love to see another movie from Lea and Aga. As a matter of fact, I always see Lea sa gym, nag-uusap kami. We've talked about it and I expressed that I would love to see a movie with the both of them."

Charlene also confirmed that Aga would still have a movie with Angel Locsin. "He's still gonna be doing that movie, but mauuna 'yong Regine [Velasquez] because they started shooting already."

Isn't she bothered about Aga being paired with a younger actress?

It's not true that her husband requested to be paired with younger actresses. Charlene explained, "Whatever the producer wants because sila rin ang namimili kung ano ang gustong i-produce, he just also abides by that as well. Although he does give input kapag nagsu-shoot sila, but it doesn't bother me."

Then, she talked about how serious Aga is with his job as an actor.

She related, "One thing that Aga and I talk about is his work, he really does movies for his audience. You know, palagi niyang iniisip kung paano magre-react ang audience, not for him. So when he does movies, it's always like a team effort. He treats everybody—from the staff, to the director, to his partner—talagang family.

"As a matter fact, kapag nagsu-shooting 'yan, I always give him space, you know, because it's his artistic space. You know, even after, he really gets involved in the movie. It takes some time for him to ease away from the whole thing kasi araw-araw silang magkasama, di ba? It takes some time to get back again kapag ganun. He's an artist and he loves his craft, especially moviemaking."