Jon Santos and the business of mixing politics with laughter 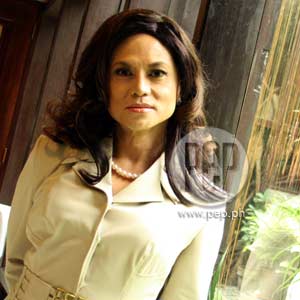 On September 5 and 18, Teatrino will roar with laughter, as the seasoned stand-up comedian shows anew his natural talent for comedy and inpersonation via the political satire, Kuring, Gluring, Syerrap at Dyuning: Election is Nearing (For Voter or For Worse).

A show that would run for a few hours entails months and months of preparation. And behind the stage curtain of every live stand-up event are tons of hard work, rehearsal, not to mention the last minute revisions.

For seasoned comic Jon Santos, the process of selecting a subject for impersonation depends largely on an individual's fame and reputation. In stand-up comedy, particularly in adopting a political figure as a stage character, the thin line separating good image from the bad is totally irrelevant.

"Hindi ka lang sikat, they [spectators] should have strong feelings for you—very positive or very negative."

WALKING ON EGGSHELLS? Jon recalls seeing Tessie Tomas several years back when she first did her take on controversial First Lady Imelda Marcos before a curious audience.

"This is a theater event where the people in attendance were the ones who intensely like her [Imelda Marcos], those intensely fascinated with her, and those who intensely dislike her. So 'yong mga ganung kalalakas ang dating na character ang basehan—siyempre, the stars, the politicians, the beauty queens.

"Although once in a while masarap mag-experiment sa teatro. You can have fictional characters, you can create a voter, a public school teacher na nagbabantay ng ballot box. Pero sa mga spoof na ganun, kailangan sikat."

A veteran of the political satire genre, Jon fully understands the possibility of earning the ire of his subjects, based on skits and physical representation. Most of the time one can go overboard to achieve maximum comic effect. He experienced performing right in front of his subjects a couple of times, an experience he described as both "flattering" and "nerve-wracking."

When asked if he experienced being confronted by an irate subject after a show, he paused for a few seconds before replying, "Wala pa."

He adds, "Because there's always an atmosphere of bonding in my shows. And for them to make it there, that means that they are in a certain mood [to have a fun]."

Jon says he never ever bothered to personally get in touch with his subjects, whether to consult or clarify anything. "Sobrang busy ng mga 'yan, insekto lang ako sa kanila," he says.

There is one exception, however, and Jon could not contain his excitement while telling his story to PEP: "Tsumamba ako na naging personal friend ko si Vi [Vilma Santos]. I had the opportunity to consult her about dramatic acting pa. Sabi niya, 'Ay, naku, Jon mag-jogging ka. Huwag mo masyadong iisipin ang script.' Nakakuha ako ng acting tips from Vilma Santos on the phone!"

He also assumed with great success the characters of the articulate, feisty Sen. Miriam Defensor Santiago, diminutive senator and ex-Department of Health secretary Juan Flavier, and as mentioned, the multi-awarded actress turned politician Vilma Santos, undoubtedly Jon's most beloved and distinct stage character of all time.

Not everyone can mimic with total accuracy. While Jon treats his natural talent for gab and comedy as a "gift," the amiable comedian reveals that hard work is still very much needed in his chosen profession.

Modern technology, along with traditional, available materials like video footage and newspaper clippings, help Jon in dissecting his subjects—from the obvious down to every nuance.

"I try my best to catch up but I am not always as sharp, so I never work alone. With the scripting, it cannot be just me," he explains, pertaining to the team spirit that's common in every stand-up production.

One would expect that Jon is well-versed on politics and national affairs, given that he has already impersonated four presidents, but...

"Am I political person?" he asks back. "I try to read more. I know I don't read enough."

As for the upcoming 2010 national elections, Jon echoes the sentiment of most Filipinos today.

"I have not chosen my candidate yet," he confesses. "May narinig nga ako, The Silent Society. It's the society of people na hindi raw aamin kung sino ang pipiliin nila."

We asked Jon, for someone who's earned the admiration of his peers and the new generation of comedians in the live comedy circuit, what was the best compliment throughout his professional stage career.

It didn't take long for Jon to answer.

His upcoming show titled, Kuring, Gluring, Syerrap at Dyuning: Election is Nearing (For Voter or For Worse) will be on September 5 and 18 at Teatrino in Greenhills, but we're already giving him a standing ovation. For sure, it will be a show like no other!