Yaya and Angelina talk about life, love, and stardom 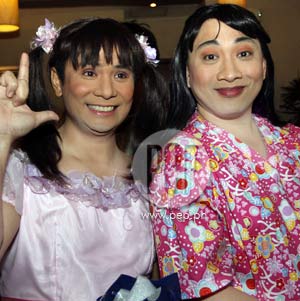 Angelina (left) and Yaya became famous for their skit "Ang Spoiled" shown in Bubble Gang for over a year now. Pinoy audiences enjoy the usual cat-and-mouse banter the two characters bring to the small screen. Asked how different their movie Yaya and Angelina: The Spoiled Brat Movie is from their TV skits, Yaya quipped the obvious, "Mas mahaba yung mvoie. More than one hour siya. Sa TV mga one minute lang kasi yo

This year's most talked-about rivalry came in a pint-sized kid and her kind, naïve nanny.

In the red corner stands Angelina, a rich and bratty young girl who never runs out of ways to inflict harm on her nanny. In the blue corner, meanwhile, stands the kind Yaya, who never abandons the naughty girl from her ward despite always getting the eventual knock-out.

For more than a year now, Pinoy viewers had been glued to the usual comic banter between Yaya (Michael V) and Angelina (Ogie Alcasid). Their exploits, shown every Friday in GMA-7's Bubble Gang, became the stuff people laugh about in their daily conversations.

And with the approaching premiere of their first movie Yaya & Angelina: the Spoiled Brat Movie, stardom is truly now at hand for them. Fans now ask: handa na ba silang sumikat?

THE SPOILED KID. Angelina was at the crux of throwing a grand tantrum when PEP (Philippine Entertainment Portal) interviewed her last Tuesday, Sept. 1, during her movie's presscon. But the young girl, who was also celebrating her birthday that day, was attentive enough to answer our questions.

Born to a rich family, seven-year old Angelina Arespacochaga grew up spoiled by her parents (played by Aiko Melendez and Jomari Yllana). She is also as bouncy, as playful, as witty, and as charming as any girl her age.

Although named after angels, Angelina acts like nothing holy. Her favorite past time, she said, is making her yaya suffer.

"Wala akong hobbies... paglaruan lang si Yaya," she said, recalling all the times she had her nanny punched, kicked, sent to jail, and tricked into drinking insect blood.

Despite her impish actions, Angelina says she loves her Yaya just as much. Of all the gifts she received from her parents over the years, for instance, she considers her Yaya as the best ever.

The Yaya, although naïve and stupid at times, never stops assisting Angelina in all the ways she's assigned to. Yaya takes the kid to school, plays with her, dresses her, feeds her, and even tries to assist her with schoolwork even with the little that she knows.

This is why Angelina, a grade 1 student, excels in school, even with her tight schedule as a star.

But her dreams still lie in showbiz.

THE LOSER NANNY. Angelina's Yaya is a survivor in her own right. More than a year after she first served as the Pinoy audience's most favorite punching bag, the unfortunate nanny never wavers from her opinion that no kid is born evil.

In fact, The Visayan nanny, who only finished high school, never beat Angelina, regardless of all the distress she causes. She accompanies Angelina every day, assisting the kid every way she could. She doesn't even have a day off.

She admits, however, that Angelina really has the habit of hurting her.

But does she ever get tired of Angelina's antics? Yaya explains that she lives for herself alone, she only works as a nanny because she loves children, and not because she has to send money to relatives in the provinces.

Is the reason for her enduring stay a large salary from Angelina's parents?

But what is the reward for her stay?

If she's unlucky with money, perhaps her lovelife calls for success. Yaya's real name being Rosalinda (she refused to give her surname), finding her other half may end in a sweet, happy fairy-tale ending.

Would Yaya find happiness in life? Maybe. What's certain is the success of Yaya and Angelina's movie, because of the passion, honesty and energy they both bring on screen.