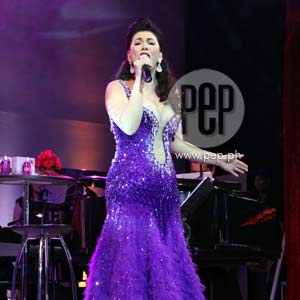 Regine Velasquez has a new venture—perfumes.

And there's no better way to launch her two trademark scents, Reigne and Songbird, than to perform a couple of unforgetable songs from her 25-year showbiz career. Last August 28, she tantalized the huge crowd at the main atrium of SM Mall of Asia with her scent and voice.

Sitting in the audience were her boyfriend Ogie Alcasid and Bench owner Ben Chan. Also spotted was Are You The Next Big Star? male winner Geoff Taylor, who told PEP that he was invited by the said clothing company. R&B Prince Jay-R hosted the event.

In between the songs were witty spiels, and the one that earned chuckles from the more than 400 mallgoers had something to do with her new role in the roster of Bench endorsers.

Regine also demonstrated the proper way to apply perfume—spray it in the air, walk into the mist, then let the scent envelope your body.

SCENTS AND SONGS. The two perfumes were represented by two varying genres of music—Songbird was soothing like mellow ballads and love songs, while Reigne was playful and adventurous like edgy tunes and rock songs.

Included in the repertoire of Regine were her previous hits and some oldies: "Tuwing Umuulan at Kapiling Ka," "Kailangan Ko'y Ikaw," "I Will Survive," "Songbird, " "Alone," and "What About Love."

Things turned romantic when the SOP host ask her "special friend" Ogie Alcasid to go onstage, so that the audience could greet him a "Happy Birthday." The audience cheered when the couple kissed onstage.

Regine proceeded to sing "And I Love You So," Ogie's favorite song, which she had recorded for her 2008 album Low Key.

For her encore performance, Asia's Songbird sang the Broadway favorite "And I'm Telling You I'm Not Going," and stunned the crowd with her high notes.