Jojo Alejar jazzes up late nights in Jojo A. All The Way 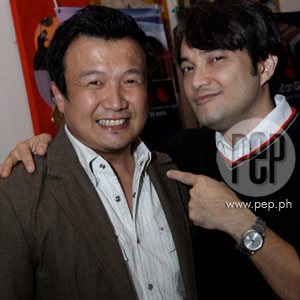 "It's a late night show like that of the United States, I copied it truly, pero it's a show with our own Filipino issues, our own concerns. That's what probably makes us different," says That's Entertainment alumnus Jojo Alejar (right, with TV5 SVP and head of brand management Jasper Evangelista) about his daily late-night show called Jojo A. All The Way on TV5.

Comedian Jojo Alejar remarked sarcastically about comments he gets that his show Jojo A. All The Way is just an imitation of the American late-night talk shows, Late Show with David Letterman, The Jay Leno Show, and Late Night with Conan O'Brien.

Jojo Alejar's show has become an alternative to the usual late-night documentaries of the two giant networks, ABS-CBN and GMA-7. For his comeback project in showbiz, after more than a decade of being away, the former dancer-comedian decided to just do what's comfortable—entertaining people.

FLASHBACK. Jojo A. is a former member of the dance group called The Tiger. After his stint in the daily youth-oriented variety show That's Entertainment? Jojo A. crossed over to a totally different field, government service.

He told PEP (Philippine Entertainment Portal), "I worked as chief of staff to one of the better congressmen, si Ed Zialcita ng Parañaque. So, I had no more time for show business. After That's Entertainment, I started muna as [Zialcita's] chief assistant sa Pag-Ibig Fund. That's why I know a few things about housing-housing din. Tapos, when he won for Congress, he got me as his chief of staff, gano'n. It was hard work, it was serious work. Although, nandoon pa rin 'yong masayahin ako."

Even while working for a government official, Jojo A. said he never forgot his first love. In fact, his many years of working as a government executive made him realize that he needed to go back to the industry he once enjoyed.

He related, "I think, that's when I found out na I think the Lord wants me to go back to show business, and just be an entertainer, or fun-loving guy na lang. Although, it was very fulfilling pero kasi ang public service, eh, medyo it's not for me.

"Kaya ang dami kong sinasabi doon sa mga tumatakbong mga artista, thay don't know what they're getting into. Ako, I know chief of staff, it is a delicate decision, e. You're second in command to the congressman, e. Kaya lang, ang hirap noon, mahirap talaga. You cannot please everybody.... Of course, I cannot question their motive for running, pero they have to think twice talaga before they get into it."

BACK TO SHOWBIZ. "This is my last chance in showbiz!" exclaimed Jojo A. as he jokingly pleaded to the media to support his daily late night show Jojo A. All The Way in the recent press conference of TV5.

After quitting his job in the government, Jojo A. said that he was tapped to do a show in RJTV29 by its owner, Ramon "RJ" Jacinto.

Thus the birth of his one-man late night show, Medyo Late Night Show with Jojo A. All The Way.

Although he got the idea of foreign late-night shows, Jojo A. has his own Filipino twist so that Pinoys can relate to it.

He explained, "I openly say it naman. It's a late-night talk show, pretty much like that of David Letterman, the way they do it in New York, in Hollywood, pero with our own issues, with our own jokes.

"Kasi marami diyan, I watch late night kasi, iba ang nakukuha kong jokes nila. When they [foreign late night talk show] talk about political jokes or colloquial na sa kanila, hindi mo na makuha, e. You have to research pa in the Internet. Unlike ours, kaya nakita ko na puwede dito because these are our own issues, our own jokes, our own humor, e."

THE PINOY TOUCH. Each day of the week, Jojo A. All The Way features different hilarious segments.

"Anak ng Foto" merges two photos of celebrities, politicians and other known personalities and comes up with their possible offspring. While "IPod (Incredible Process Of Deduction)" uses celebrities' names and give its wacky meanings.

"Di Kita sa Camera Café," on the other hand, tweaks the short comedy program Camera Café. Then, "To-Pic of the Night" or "TOking PICtures of the night" shows pictures of the newsmakers and famous people with funny captions and dialogues in thought bubbles.

Jojo A. All The Way would not be called a talk show if it didn't have a live guest, whom he would interview on his show.

In its pilot episode on TV5, Jojo A. had the sexiest man in the country, Dingdong Dantes, as his celebrity guest. Next came other celebrities and key personalities such as Ara Mina, Benjie Paras, Matt Rallo III, Movie and Television Review and Classification Board Chair Consoliza Laguardia, his former boss Rep. Ed Zialcita, and the controversial director Carlo J. Caparas and wife Donna Villa.

"The guests are something very interesting because we can get anyone, e. It's generally a people's show, that how I call it. That's why sometimes I go to the show and say, 'This is your show, I'm Jojo A. All the Way.' You see, anyone can come in, e. I guested quite a few media people, businessmen, politicians, and artistas—anyone can come in," said Jojo. A.

When PEP asked the TV host who else he wants to appear on his show, he replied spontaneously:

Despite having been transferred to three TV networks already, Jojo A. All The Way continued to get more followers. The show's host and producer never thought the Pinoy audience would appreciate his program this much.

"I wasn't expecting anything at all, e," he said. "I just wanted to do something that I want to do. 'Yong if they appreciate it, it is a bonus. If not, then sorry, it's me, you know. I just wanna have fun, and hopefully my fun will affect you, and get you feeling good also. Wala, then 'yong fan-base started following na. It was a bonus talaga for me, and for that I'm very thankful."

Speaking of followers, he told PEP excitedly that his viewers were not only ordinary Pinoys. Even prominent persons approach him just to say they watch his show.

The late-night host narrated, "You know what, ang nakakatuwa do'n, I get a kick out of these all. There are several instances, 'no, halimbawa sa Greenhills, naglalakad ako. Meron doon 'yong talagang makikita mo, dignified-looking, e, [sasabihin sa akin], 'We watch your show,' mga gano'n. Si Tony Boy Cojuanco nga, e, during our launch, he went up to me pa, ha, of all the shows there, he went up to me and said, 'Hey, I watch your show.' And ang dami, ang daming instances na gano'n!"

Aside from his own show, Jojo A. appears on several TV series or movies as a special guest actor. For the last quarter of 2009, he will be seen doing cameo roles in three different movies.

However, the former actor said that this doesn't mean that he will permanently be an actor and leave his hosting job some day.