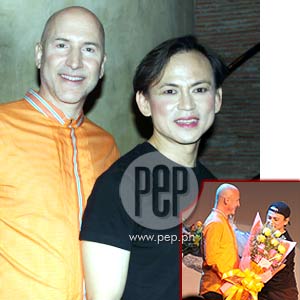 Jon Santos's performance in Kuring, Gluring, Syerrap at Dyuning: Election is Nearing (For Voters or for Worse) drew loud applause from the audience during the show's opening night last September 5. The seasoned impersonator also received support and flowers from his real-life partner West Stewart.

Jon's show focused mainly on the romance between Korina and Mar and the implication of the latter's decision to abruptly withdraw from the presidential race to give way to Noynoy Aquino's own bid—presented of course in a comical way to keep the crowd in stitches.

WEST ON PINOY POLITICS. Behind the camera, Jon's personal lovelife continues to be strong. Present during the event was the funnyman's real-life partner, West Stewart.

They got married on August 24, 2005 at the North York Family Court in Toronto, Ontario. Ontario is one of the eight provinces in Canada that allows same-sex marriages.

PEP (Philippine Entertainment Portal) caught up with West, who is a regular fixture in all of Jon's gigs and shows, after the opening night of Kuring, Gluring, Syerrap at Dyuning: Election is Nearing (For Voters or for Worse).

West told PEP: "Well, it's the beginning of the election season. I've been here a few years and the election starts with a comedy program, usually something like Rock Da Vote and Jon's always in front of it."

The half-American and half-Italian West is familiar with politics here in the Philippines and the humor that goes with it.

"I think it's colorful," West said, smiling. "Lots of interesting character and different platforms and different ways of looking on how they want to do the job."

West praised his partner's dedication and talent, a healthy sign that stand-up comedy thrives in this country.

"It's thrilling because he [Jon] combines the stand-up comedian shtick with relevant social commentary. There are a few very good comedians in the United States who can do that, but not as many as it used to. This is like '70s or '60s kind of comedy where it has a little bit of edge to it."