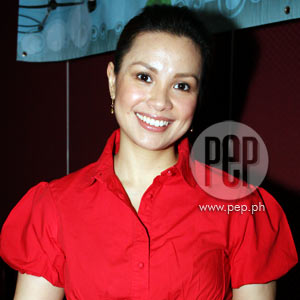 Lea Salonga says she remembers little of how she performed "Bayan Ko" during the Requiem Mass for former President Corazon Aquino last August 5. "It's one of those out-of-body experiences. There's actually little that I remember of the actual experience. What I remember now is what I see in YouTube. It's like I prayed to God, that I need to focus... just to get out there and be honest and sincere," she explains.

One of the most memorable moments in the Requiem Mass for former President Corazon Aquino last August 5 was Lea Salonga's heart-wrenching rendition of "Bayan Ko," which prompted mourners to remember the country's struggle during the Marcos regime.

"Bayan Ko," composed as a protest song during the American occupation of the Philippines, gained prominence when it was used as one of the anthems in the 1986 People Power Revolution. It was first written in 1929 as a poem by Jose Corazon de Jesus, more popularly known as Huseng Batute, and was set to music by composer Constancio de Guzman.

Lea revealed earlier today, August 23, at the presscon of her upcoming concert Lea Salonga... Your Songs that overwhelming public demand convinced her to include the song in the concert's repertoire.

The concert, to be held on December 11 and 12 at the PICC Plenary Hall, will feature the internationally-acclaimed theater actress singing songs requested by fans around the world, through the website www.LEAyoursongs.com.

Of the 1,300 suggested songs since the website opened two weeks ago, Lea said "Bayan Ko" ranks at the top in the number of requests. The demand may have been caused by her well-applauded performance during the Requiem Mass for President Aquino.

Lea believes singing the song again will be a great experience for her and the audience.

"To do that song with this orchestra and the audience, all remembering the day and who she was, it's gonna make for something incredibly emotional. I'll reveal this much: I don't think I can deny all those requests for this particular song. I think we have to ultimately perform it," she said.

But Lea admitted that she finds it hard to prepare herself to sing the song again.

"I don't think it's gonna be an experience that...I can truly prepare myself for... I have to get up there and sing it and remember how we are grateful to her for everything she had done. To sing the song, and to sing it well, and not get out of tune to be an honor for her," she explained.

YOUR SONGS CONCERT. Lea explained that her upcoming concert was conceptualized as an answer to her friends and fans who keep commenting in each of her concerts that her performance "could have been better" if she sang "another song" instead.

"You know what? How about I do this very democratically so none of you have any right to complain? You get to pick the song, and I will sing it for you," she offered.

So far, the requests she has been receiving range from the normal to the far-out weird.

"We get 'Pokerface' from Lady Gaga, we get 'Rehab' from Amy Winehouse, we get Dashboard Confessional, we get The Dawn, Michael Jackson... We have all kinds of requests," Lea said.

What she wants to avoid, however, is repeating performances she had already done a lot of times. To successfully request a song, therefore, one must think "out of the box."

"Personally, I'm trying to avoid songs I've already done before, or songs already available in the DVDs and the CDs. I want to try as much as I had never done. That's the challenge of it. That's what makes me tick," she said.

Lea said although she has no idea what Ai-Ai is going to do, she feels excited to collaborate with the talented comedienne.

"I saw her a few days ago and she said it's going to be an honor to do this for me. Quite honestly, the honor is also mine, because she's so talented and charming," Lea said.

As for Richard Poon, Lea picked him to perform in her concert for his talent and, as she said in jest, for his good looks.

"Richard Poon. I wanted him because he's so charming and sings so well, and he's really cute. And the 'really cute' part is enough to get him in!" she joked.

The multi-awarded singer explained that she believes Richard is an exceptional performer. She explained how she started admiring the businessman turned singer-actor.

"I guested in ASAP one day, and he was one of the Sessionistas in the show. What I was so impressed by was that he sang harmony for every artist that sang solo... I said, that's a great team player! And I wanted somebody like that. I want to work with him," Lea said.

Award-winning dance group Philippine All-Stars will also perform with Lea onstage. Accompanying her songs will be the 47-piece FILharmoniKA Orchestra. Her brother, conductor Gerard Salonga, will be the concert's musical director.

Lea Salonga... Your Songs is produced by AmbientMedia and will be directed by Bobby Garcia.