Gabby Concepcion speaks up about his former manager Rose Flaminiano 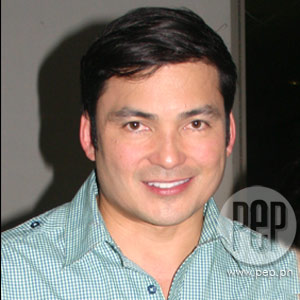 Gabby Concepcion wants to move on with his life after getting into a legal battle with his former talent manager Rose Flaminiano. "Time has a mysterious way of curing things, sabi nila. I think it's just about time. Everybody has suffered long enough. Everybody has to move on. That's enough of the hurting because hindi na healthy yun."

His previous teleserye, Iisa Pa Lamang, might have ended months ago but that doesn't mean Gabby Concepcion has been out of the limelight. In fact, he has been busy shooting for numerous endorsements, managing his own water refilling station, and even serving as a host in the noontime show Wowowee.

Now Gabby is currently working on his second soap opera for ABS-CBN titled Dahil May Isang Ikaw. In this teleserye, he is cast as a manager of a mining company owned by Chin-Chin Gutierrez. But his heart belongs to his childhood sweetheart portrayed by Lorna Tolentino. Dahil May Isang Ikaw is slated to air its pilot episode this Monday, August 24.

"But we all have to work on goals and we have goals that right now, as a family, we should be working together for. And if show business doesn't work for me—for us—then siguro kelangan ko nang bumalik. If we all decide to. Ngayon, this is a trial, e."

Gabby then revealed that his contract with ABS-CBN will last until 2010. He is slated to do a movie that will be part of the Metro Manila Film Festival this December.

Speaking of contracts, what is now the status of his contract with GMA Films?

ON MOMMY ROSE. Gabby's relationship with Rose Flaminiano turned sour when the comebacking actor clarified some points regarding his contract with the talent manager. It quickly turned into a media frenzy that lasted for several weeks.

During this troubled time, did Gabby ever think of going back to the United States?

"It's a commitment so itutuloy ko ang commitment, di ba? Ayoko naman maka-hurt ng relationship. I don't want to close my doors so my doors are open to anything," stresses Gabby.

What about his contract with Mrs. Flaminiano?

"That's on the legal side. It [the contract] ended nung lumabas yun so that's a closed book."

Is he on good terms now with his former manager?

"Time has a mysterious way of curing things, sabi nila. I think it's just about time. Everybody has suffered long enough. Everybody has to move on. That's enough of the hurting because hindi na healthy yun. She's a mother, too.

"Ang bottomline ko, I mean well for everybody and I hope masusuklian yun, ganun lang. I have nothing to gain if I become intriguing. What for? I've been there, done that. Ayaw mo namang makaisa, ayaw mo naman ding naiisahan. You're just doing what's right."

Right now, Gabby says that Atty. Dexter Lacuanan handles all of his affairs.