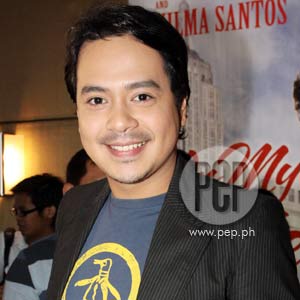 In the prime of his life, John Lloyd Cruz has already achieved much in terms of acting.

From his stint in the defunct youth-oriented weekly drama Tabing Ilog, the former teen star has already proven that he deserves to be part of the local show business.

His skill has been recognized more than once by respected award-giving bodies such as Film Academy of the Philippines and FAMAS. Early this year, the Guillermo Mendoza Memorial Scholarship Foundation, Inc. hailed him as Box Office King for 2008 because of the success of his movie with Sarah Geronimo titled A Very Special Love.

For some, these already make John Lloyd as one of the biggest celebrities today. But the actor refuses to entertain the idea.

He told the media at a conference held recently, 'Maraming mga magagandang bagay ngayon na dumarating sa akin—pelikula, endorsements, sa career ko. Masasabi ko na may narating na rin tayo kahit papaano. Pero at the end of the day, pagkatapos ng trabaho, pag-uwi ko, I still try to be that person that I wanna be—with my family and with my friends."

The multi-awarded actor added that he would like to maintain the life that he had before entered showbiz. He doesn't want to forget it just because he's famous already.

John Lloyd admitted that being a prominent person would lead to losing his private life. However, the young Kapamilya actor said that there were times when he wanted to take off his celebrity mask and live a normal, carefree life.

"I HAVE CHOSEN THIS PATH." In spite of all the public attention, which makes him feel uneasy, the 26-year-old actor said that he had already made a decision to keep walking the path of being an actor.

He said that as early as Tabing Ilog days, when most of the Pinoy audience would call him by his character's name Rovic, John Lloyd already knew that acting would be the craft that he would always treasure.

IMPROVING HIS ACTING SKILL. Talking about his acting skill, John Lloyd said that he's now trying to learn how to keep himself from getting involved in the characters he portrays. This he did in his upcoming movie In My Life.

"Now it's less personal," said John Lloyd when asked about the changes in his acting style.

After more than 10 years in the business, does John Lloyd think he has already made his mark?