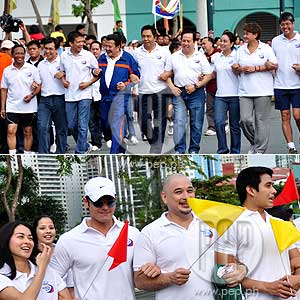 Last Sunday, August 30, GMA-7 initiated a unique advocacy run in support of clean and honest elections. Starting off from the NBC Tent at Bonifacio Global City, over 5,000 runners ran the 5 km and 10 km race around the grounds.

GMA7 Network Chairman, President, and CEO Atty. Felipe L. Gozon explained what makes this run-for-a-cause different: "As I have said before, it shows that many Filipinos are really interested in putting many things right for the coming elections. We have always believed in what we are saying so we thought that we should bring all the potential candidates together, so that people will see that they are also cooperating."

And cooperate they did. Eleksyon 2010 na, Tatakbo Ka Ba?-Hamon Para sa Kaayusan ng Pilipinas was attended by 13 presidential and vice presidential candidates, along with celebrities, hosts, and reporters.

WBA Super Flyweight champ Nonito Donaire Jr., who arrived with his wife Rachel, took part in the opening prayer of the run and firing of the ceremonial gun. Wearing all white and a fedora, he and his dog walked the 100-meter ceremonial stretch.

THE RUNNERS. While waiting for the Tatakbo Ka Ba participants to return to the starting point, bystanders and supporters expressed their thoughts on the ten signature freedom walls placed around the grounds. There was also a program, where TV personalities were heard issuing remarks about the event.

Survivor host Paolo Bediones served as the primary emcee of the entire event—coming from the main stage, he made a stop in the VIP tent before heading outside again to cover the unity walk. Gloc9 was invited to perform on the main stage during the actual race. He sang Sumayaw Ba, an upbeat song which kept the energy level of the audience high.

Arnold Clavio hosted the segment which tackled how the automated election process will be implemented. He said, "It's going to be an exciting election—mabilis, and [there's] a chance for the silent majority to be directly involved."

He expressed gladness "dahil sa ganda ng support" and that people were being made "socially aware of what's gonna happen."

Suzi Entrata-Abrera, who handled a portion of the program, commented on the massive turnout, and one of the perks of making it to the run: "They get so many plusses being here: they get to see a lot of celebrities, and they get to see a lot of the presidential hopefuls. What makes this different is the contract-signing of sorts and the unity walk, so no campaigning, and an opportunity for them to show the people that they are supporting clean and honest elections."

Kara David, veteran News & Public Affairs reporter, was on her third 10 km run that day. She wrote on the freedom wall, "Magmalasakit" because she felt that "marami kasing mga Pilipino angcynical na at apathetic, and I think that's what killing the country, when people lose hope, when people don't care anymore. So magmalasakit, magingcompassionate tayo sa ating mga kababayan. Yan ang susi. Huwag natin i-asa lahat sa ating gobyerno. The government is in us and our country is in us."

Asia's Songbird Regine Velasquez, who sang Isang Lahi for the program, was very pleased with the outcome of the event. "Singing this song now after so many years gave it a different meaning," she remarked. For her number, she wore platform pumps and an elegant cocktail dress. She didn't get to stay long though because she had to make her way to SOP, where she's one of the main hosts.

Marian Rivera and Dingdong Dantes, wearing the event's custom-made white T-shirts, were spotted walking side by side. During the program, they were tasked to award the prizes and special awards to some of the winning racers.

Respected actor and director Ricky Davao, looking all pumped up right after the race, shared: "I feel great joining this race for my health, a lot of people's health, and the health of our country. I hope and pray that this will have a domino effect." To the candidates he had this to say: "Be truthful and do your job."

After the unity walk, evangelist and church leader Bishop Efraim Tendero of the Philippine Council of Evangelical Churches led everyone in a moving prayer.

THE ELECTION RUNNERS. Mel Tiangco and Mike Enriquez alternated hosting duties during the special program and oath taking. When they called on Sen. Kiko Pangilinan, a faint "Shawie, Shawie" was heard from some of the onlookers.

When former President Joseph Estrada came onstage to join the other candidates, people in the crowd chanted "Erap, Erap, Erap!" while raising their fists in the air.

Sen. Mar Roxas described the event as "inspiring," and before he left, he said: "Nakakataba ng puso to see people ready to see change, ready to help work for a good future."

Sen. Manny Villar related, "All your support will hopefully allow all those who signed the contract to indeed do it"—meaning, follow the terms of the contract, which underscores clean and honest elections.

Bayani Fernando, Chairman of the MMDA had one simple message: "Let's get it done!"

A copy of the contract or oath was provided to the press and media people during the closed-door press conference. Comelec Chairman Jose Melo led the candidates in reciting the oath, while Taguig City Vice Mayor George Elias, a notary public, made the document official in the presence of two witnesses.

As the candidates affixed their signatures on the document, Noel Cabangon rendered Tumindig Ka andthe audience actually stood up towards the end of the song. Mike Enriquez raised both his hands and spurred the crowd on.

Atty. Felipe Gozon promised that other activities following the August 30 advocacy run and unity walk will be undertaken with many different partners, and "that we will carry this through until the election and that we will do our part."

Mr. Duavit was "very happy," too. He said, "It is very encouraging that we all share the same commitment and the same desire for this kind of get-together to make a commitment towards something that is very important to all Filipinos—clean, honest and relevant elections."

The event ended with the sun shining brightly. And to borrow a line from Noel's song, "Tumindig ka, PEPster. Tayo ay isang lahi."