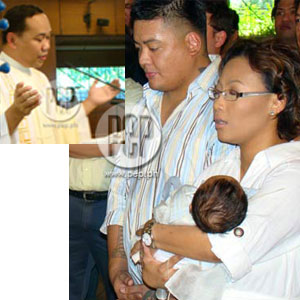 During the homily, Fr. Julius Angelo Pelarion (inset) reminded Dylan's parents, Gary Gotidoc and Jaya, and the godparents, to "give a good example of Christian living."

It's absolutely certain that Dylan Gotidoc, the second child of singer Jaya and husband Gary, will not have a hard time growing up. What with his 46 godparents—24 ninongs and 22 ninangs—all willing to give him more than just the occasional Christmas present.

Officiated by Fr. Julius Angelo Pelarion, assistant parish priest of the Sta. Maria della Strada Parish Church, the baptism started at 3PM. The reception was held at the Clubhouse of the Ayala Hillside Estates in Quezon City.

Baptism, one of the seven sacraments in Roman Catholicism, is a rite of initiation to the Church. Godparents have the duty to instruct their godchildren on how to live as good Christians.

Dylan Gotidoc was born on June 27, at the Cardinal Santos Hospital in San Juan City.

Jaya expressed her wish for Dylan's future: "We wish that you remain humble, respectful to your parents and, of course, to your grandparents and your ninongs and ninangs. Be true to yourself... maging mabait kang bata, yun lang."

Proud father Gary added, "Always trust in God. You have to follow your heart, boy."

THE GODPARENTS. Dylan's godparents also expressed their wishes for him.

Marvin Agustin, a host in SOP, where Jaya sings regularly, wants Dylan to be, "Mabait na bata more than anything else."

Dingdong Dantes, who wasn't able to attend the baptism but was at the reception, said he wishes Dylan would "grow up to be a God-fearing, talented and respectful boy."