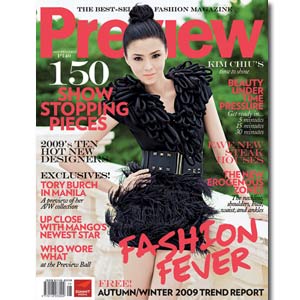 "I want to explore three different personalities in one show—a bad one, a good one, and one in between. I've always wanted to be part of a set of triplets, but all I have is myself," says Kim Chiu in her interview with Preview .

The hit primetime teleserye Tayong Dalawa may be coming to a close, but Kim Chiushows no sign of slowing down. The young actress' star is clearly on the rise, as she wears the latest trend in this year's Autumn/Winter collection for her first solo pictorial for Preview magazine this September.

"These are the looks every fashionista will wear for the rest of the year," says Preview editor-in-chief Pauline Juan, as Preview takes the trend straight from the international runways and into the pages of its annual Trend Report.

Much has happened since Kim joined other rising stars for Preview's special gatefold cover in June 2008. "Today, she's one of ABS-CBN's biggest stars, and the ratings of her soap has been consistently phenomenal," says Pauline.

Kim herself seems to be raring to tackle bigger and better roles. "I want to play triplets," she tells Preview. "I want to explore three different personalities in one show—a bad one, a good one, and one in between. I've always wanted to be part of a set of triplets, but all I have is myself."

Having three Kims would certainly help her deal with her very hectic schedule, but Kim takes her job's demands in stride, as she sees all the hard work translate into the soap's high ratings. Plus, Tayong Dalawa has given the young actress a chance to work with some of the most formidable names in showbiz.

"I never expected to work with so many great actors in one project," Kim enthuses, rattling off the names of co-stars Anita Linda, Gina Pareño, Cherry Pie Picache, and Agot Isidro. "I'm really blessed because I've learned a lot. Sometimes, they'll give me advice like, 'Kulang pa anak, ibigay mo pa.' Then they'll ask Direk if we can do it again, just so I can do it better," she says.