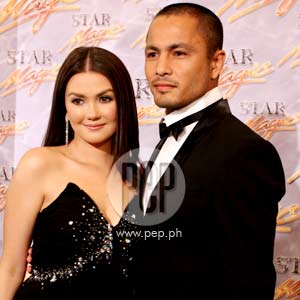 Angelika Panganiban and Derek Ramsay are both very busy with their showbiz projects, but whenever they have free time, they travel. Their next stop is either Fiji or Maldives.

Currently making a name for herself in the comedy scene with the gag show Banana Split, Angelica Panganiban is set to go back to romantic drama as she topbills the Pinoy version of the hit Mexican telenovela Rubi.

PEP (Philippine Entertainment Portal) was able to talk to the actress during the Star Magic Ball held at Shangri-La Makati.

Is she pressured to portray the lead character in this very sensual project?

In Rubi, Angelica will be paired with Diether Ocampo.

2010 FIFA WORLD CUP WITH DEREK. Because of their busy schedules, Angelica and her boyfriend Derek Ramsay hardly have any time for each other, but they make it a point to spend quality time whenever they have the chance. To make up for lost time, they go on trips abroad.

"We're planning a trip next month to either the Maldives or Fiji," declared Derek. "I told it to her that I like Fiji. It's a beautiful place. Siya naman nag-mention sa 'kin sa Maldives. So we're picking pa lang which one to go. Dapat nga pupunta kaming Europe at the end of September. It would be my chance to show her England."

But their biggest goal is to attend next year's FIFA World Cup in South Africa. This event is organized by the Fédération Internationale de Football Association (French for International Federation of Association Football).

"Every four years lang yun so we have to wait for another four years. We cannot afford to miss this," stressed Derek.

He also reveals that he is a very spontaneous guy when it comes to traveling.

"I'm not even planning. I'm just planning to get there and bahala na when I get there. You know, no hotel rooms reserved. No nothing."

The Kapamilya actor says he's very lucky to have the girlfriend who understands his love for football.

In fact, Angelica has seen how Derek can be carried away when he watches a football game.

With reports from Marie Ruth Berma