FIRST READ ON PEP. PART I: Che Tiongson pleads for "freedom" and "peace of mind" 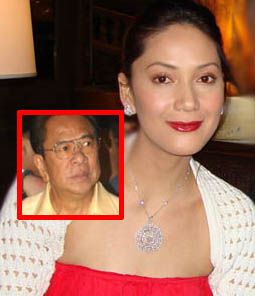 In the end, it was the "protection and custody of the children" that drove Rachel "Che" Tiongson to file a formal complaint against Luis "Chavit" Singson, the man she lived with for 17 years and by whom she has five children.

On September 2, with her legal counsel Aida D. Dizon, Che filed a civil case against Singson before the Quezon City Regional Trial Court.

The same document also logged the time of Che's physical checkup at 3:52 a.m. of August 23, or four hours after the beating took place.

Chavit Singson, for his part, has given television interviews where he admits to beating up Che and her male companion. Totally unrepentant, the public official says: "Mabait pa nga ako, hindi ko sila pinatay."

Aside from showing the picture of a tortured and naked Richard around, says Che, Singson would provide onlookers with a running commentary.

She does have a theory as to why her partner of 17 years has gone around spreading the story himself, complete with pictures.

Then she started to worry about whether she would ever find a way out of this state of affairs.

CHILDREN AFFECTED. The first four days after her beating were the most difficult, Che says. She was in pain, she was confused, she was traumatized. "Iiyak ako bigla," she says.

She says she would have filed a criminal case against Singson, but she did not, for the sake of their children, who are still in elementary and high school.

But she still had to make the move to go to court, she says, because she feared another round of beatings. Earlier, on television, she had said that Singson used a horsewhip on her, the same one he uses to tame his famous caged tigers. He was also, she says, accompanied by his men who would later hold down, strip, and torture her male companion.

According to her, Chavit actually said while he was torturing her, that he had long had her under surveillance. "Pati phone ko, naka-tap. Lahat, ganun—conversation, text messages, lahat."

In her affidavit, she stated that Singson had been "verbally abusive" and "physically abusive and with alarming frequency and regularity," and that she was now in "overwhelming fear for her life."

FIRST PHYSICAL ABUSE. She also reveals that this was not the first time Singson had been violent with her.

The veteran politician—who was a former Ilocos Sur governor and the man generally credited with bringing former President Joseph Estrada down—has a fearsome temper, says Che. He doesn't explode often, but when he does, she says there is no reasoning with him.

Eight years ago, she recalls, she confronted him about a woman that she had heard he was seeing.

She did not file a complaint in any court nor did she have the incident recorded on any police blotter then, but she did secure a medical report.

Che says, almost matter-of-factly, that she has also had her share of verbal abuse. But she did not elaborate on this, except to say, "Pag may hinihingi ako sa kanya before, kailangan niya pa akong sigawan."