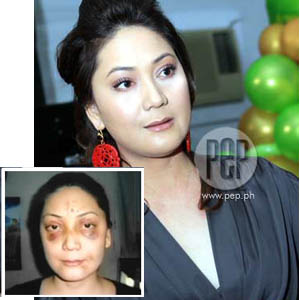 From a life that began seemingly wonderfully, if naively, at 19 years of age, when she fell for the "generous" ways of a "gentleman," one who was at least three decades older and very much married, a big politician, whose big promises of marriage never came to pass, and whose five children by her are now all under the wing of their father—Che Tiongson today looks to a future that is at once difficult and messed up, yet thankfully different and hopeful.

The difficult part is simple enough to see. Che has no skills to get herself employed in a job that will pay for rent and food, much less send five children to private school. Neither does she have money or connections to start a business, no matter how modest. She was plucked at 19, when she had just begun college. She has not studied since and has never worked. She is finding, she says, that she was raised to be a dependent.

She says that she never thought of filching money from Chavit Singson, her landed and wealthy partner.

Not that she could have taken money from the vault, she says calmly. The vault had a combination, the number of which she does not know. She wants to assume though, that on those occasions he gave her money to spend, he gave this to her with an open hand.

TREATED LIKE PROPERTY. Right now, things are still looking messy for her, she admits. For some time, she had felt like she was being treated like property, but couldn't seem to do anything about it. Partly because, she suggests, she felt helpless. Partly because, she says, he had the kids for leverage.

In fact, she says, he was there on August 22, a Friday, the day before he beat her up. "Grabe siya. Ginalaw pa niya ako nung Friday, na parang wala siyang balak gawin. Na meron pala siyang plano na sundan ako, at gagawin iyon [to beat her]."

And, if the court pleases, she wants permanent custody of her children. And for her kids' needs at school and home, she wants P300,000 a month.

(Note: PEP has an exclusive interview with Luis "Chavit" Singson, to be uploaded at the soonest possible time.)

POOR BEGINNINGS. Still, Che says she is set on going back to basics. Life from now on will be very different from what she has known in the last seventeen years, she admits, but she can do it. After all, she acknowledges, she comes from humble beginnings.

She finds that there's nothing left in the relationship with the public official to make her return to him. She speaks of thoughts that seem to have been percolating in her mind for some time. She speaks of minding her own needs.

The welts just below her eyes are subsiding now on her still beautiful face. "Napulot lang daw niya ako sa basurahan—'tapos daw binihisan, tapos yumabang na. Natawa ako dun," she says of Singson's television pronouncements. Che's voice is as calm as when she first began to speak to us. She sits poised in her chair. Her mouth laughs. But her eyes don't smile.