Dingdong Dantes and his stairway to success 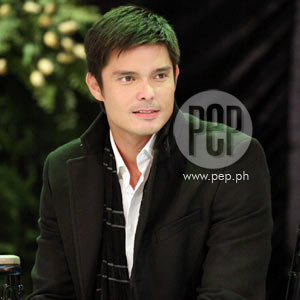 YES! Life Stories: Dingdong is currently out in the newsstands. When asked why the 29-year-old actor chose to collaborate with Summit Publishing, he answered: "I believe them so much, and I believe in their capability, given their widespread circulation, and yung respect at saka yung kung gaano sila katatag sa industriya. I wanted sana rin to distribute it, at first, until it came to a point of, you know, it was already a partnership." And

The word "slow down" is the farthest thing from Dingdong Dantes's mind.

Since he was introduced as Iñaki in T.G.I.S. (Thank God It's Sabado) 15 years ago, he's never lost his momentum.

From being the country's boy-next-door crush, he went on to become one of the world's sexiest guys. From pa-tweetums roles, he achieved his present leading-man status.

But nothing was ever handed to him on a platter.

It took him years before he could bag a prime role in GMA-7's primetime block, where his team-up with Tanya Garcia in Sana Ay Ikaw Na Nga (2001) was a mild hit. And another few years before he captured the public's full attention with his role as Ybarro in Encantadia (2005) and Sergio Santibañez in Marimar (2007).

Dingdong took the slow-but-sure route to success, and his fans became his witnesses.

Indeed, Dingdong Dantes is more than just a pretty boy.

His deep thinking and positive attitude were captured by his bookazine YES! Life Stories: Dingdong, a first in local showbiz.

In an exclusive interview with PEP (Philippine Entertainment Portal), he narrated how this project came about:

He's a very busy man, but he made sure he could find time to work on the concept, pose for the pictorial, choose the final photos, and even approve the content. All these happened in about "three months."

It was "mabusisi," and he related how he and the team arrived at the final photo on the cover: "Nung prinesent sa amin, pito siya, e. 'Yan ang mas patok pero hindi ko sinabi, so inantay ko sila and, it turned out, we have a common choice. Ang explanation nila is—it is straightforward, it is raw, wala kang makikitang photoshop—what you see is what you get."

The bookazine would cover almost half of Dingdong's life—including his reality, fantasies, and dreams.

THE REAL AND IMAGINED ARE ONE. Dingdong is one of those few showbiz hotties who took the righteous path. No news about him getting so carelessly drunk, or involved in a row or a brawl.

He is a celebrity, and he takes his real life seriously.

GMA-7's prime leading man said, "The reality that you know we are given or most specifically I am given an opportunity in this industry to make myself useful. And I feel na kailangan pagbutihan ko talaga lalo, and magampanan ko yung personal dreams ko. Parang in a way, ma-fulfill ko siya for myself and, at the same time, makapagpasaya ako ng tao."

His ultimate dream is to "literally fly."

He added, "To become a pilot someday. Still, ganun pa rin...Parang ano iyan, e, kahit nung bata pa ako, 'what would you wanna be?' I would always yun pa rin, e. I believe naman na age would not be a hindrance."

But while he's putting his ultimate dream on the shelf, he wants to be good at what he's currently doing. Despite his successes, he bluntly admitted, "I have not reached the peak."

Dingdong continued, "I see it this way, I believe that when you are at the peak, parang there will be no other place, e, but to stay there and just be there. Hindi ko nga iniisip na descend, e, wala tayo dun at ayokong mangyari yun. Pero it's more of, it's just like a mountain na parang just waiting for eruption, and great things will follow. So parang ganun siya."

From here, we segued the topic into his hopes and plans for the coming years.

His "greatest fantasy," as revealed in his bookazine, "is to become a vampire."

His explanation: "As a kid talaga, I found it to be the most interesting, parang, character. Kasi medyo dark ako as a kid, mahilig ako sa mga horror, sa mga dark fantasies, so ito yung pinaka-nag-stick sa akin. And siguro, it is the thrill of jumping on rooftops. Very sensual siya, e, so, ako as a person medyo ganun din ako."

How would you differentiate the real from the reel Dingdong?

"There is no difference. Kumbaga, how I am when I am not doing roles, that's precisely who I am."

DINGDONG THE LOVER. Of course, his life story would not be complete without his lovelife.

We asked him about his marrying age, and he answered, "Wala naman."

And when does he say love is at its peak?

Carefully weighing his reply, he paused for a few seconds. "Yung peak ng love, it's when you can drop everything and leave, tingin ko."

During his younger years, yes, he said, "I had my share of heartbreaks. Meron din naman. Meron talaga." But as he grows older, his definition of love becomes more profound.

What makes him stay in a relationship?

"Hope," he quickly said. "The feeling that it helps me to become a better person, and at the same time, hope that it will be for long. Pero siyempre, dati naman, iba yung level of seriousness and intensity. As the years go by, mas sumiseryoso habang tumatanda, parang ganun."

And what makes him go away?

His reply: "Siguro ano, when the love was transferred to a higher being."

STAIRWAY TO HEAVEN. The last time we talked to him, he had not yet studied his role as Cholo, originally played by Korean Superstar Kwon Sang Woo in the Korean TV series Stairway To Heaven that became a hit. (Click to read story.)

After three months of assimilating the character, he described it as "a challenge."

But to put his own brand of acting, "I watched it siguro up to the half, kasi in a way baka gayahin ko, e, ayoko talaga. So, along the way, madi-discover ko pa yung kung papano pa makaka-add ng Dingdong play ko doon, magkakaroon 'yan, I'm sure."

STAIRWAY TO SUCCESS. At present, he has a TV series, he's preparing for a hosting job in Starstruck, not to mention his numerous endorsements.

But he is well aware of the fact that he's far from being made. He still has a lot of dreams to conquer, a lot of lessons to learn, and a lot of things to do.

"Para sa akin peak is when you can say 'Thank you, I would like to give the floor to the next person...' he said pensively.

Dingdong is taking things in stride, and while he's making the journey, he just wants to "rock and roll!"