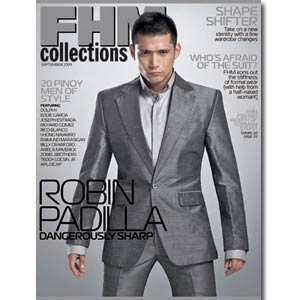 In an earlier interview with PEP (Philippine Entertainment Portal), Robin Padilla said he himself will buy many copies of the FHM Collections special edition that features him on the cover.

Tagged the "Bad Boy of Philippine Movies," Robin Padilla leads this September's FHM Philippines' list of 20 most stylish men in the country. Robin is also FHM's first-ever male celebrity to be on its cover.

According to the top men's magazine, the action star was chosen to lead the roster because he is "iconic."

"He is building a myth around him without even trying," says FHM.

The personalities were selected because they are "fierce individualists" who "look good" while working in their various fields, says FHM.

The FHM feature on Robin Padilla has an exclusive one-on-one interview and photos of Robin sporting designer suits, slacks and shoes. The action star is usually seen in his hit movies and TV shows wearing leather jackets, tattered jeans and rugged boots.

Robin added that the shoot, managed by ace lensman Jun de Leon, was a great experience.

Robin also asked his fans to buy the magazine, naming it a "collector's item."