The Originals in Philippine movies 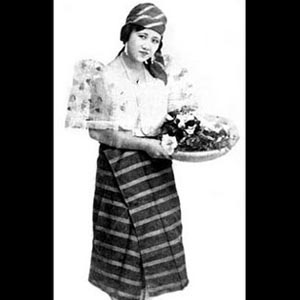 Before the Young Superstar Judy Ann Santos, before the Megastar Sharon Cuneta, before the Star for All Seasons Vilma Santos and the Superstar Nora Aunor, there were the "Original Star" and the "Original Superstar" of Philippine Movies. Above, Atang de la Rama in 1919, at the age of 17 was the Philippines first movie actress in the film adaptation of zarzuela Dalagang Bukid.

A couple of weeks ago, we learned that before Robin Padilla, the title "Bad Boy" of Philippine Cinema was first bestowed on Lou Salvador Jr. and then to Ace Vergel.

Nowadays, showbiz reporters love to tag celebrities with titles that they hope would catch on with the fans and further boost the careers of these celebs.

There were also the original Queen of Philippine Movies, the first Best Actress and Best Actor, and many other forerunners who influenced and helped shape the Philippine movie industry.

THE FIRST MOVIE STAR. In 1917, the Father of Tagalog Zarzuela, Hermogenes Ilagan, wrote the zarzuela Dalagang Bukid especially for a very talented, charismatic 15-year-old kundiman singer who had been taking the zarzuela stage by storm. The young singer-actress's name was Honorata "Atang" de la Rama.

Trained under the watchful eye of her brother-in-law, Maestro Leon Ignacio, one of Tagalog zarzuela's pillars, Atang filled theaters, stadiums, open plazas and even cockpits with her performances, especially during Dalagang Bukid's run.

Two years after and with its popularity still big among zarzuela fans, Jose Nepomuceno, then budding filmmaker and now acknowledged as the Father of Philippine Movies, adapted the famous musical play into a black-and-white silent film with the same title. Dalagang Bukid was his company's Malayan Films—and the Philippines'—first ever feature film.

Nepomuceno acted as a "one-man army" of his first movie—producer, director, story and scriptwriter (translating Ilagan's Tagalog zarzuela into English and Spanish), camera and laboratory man, art consultant, editor, distributor and exhibitor. So it was, as well, for the next movies he made under his film company.

Atang and her zarzuela leading man Marcelino Ilagan (Hermogenes's brother) became the Philippine movies' first-ever movie actors. But it was really Atang whom everyone wanted to see and hear. Her transition from stage to film made her even more popular than before. Her charisma onscreen was as strong as her acting onstage.

Indeed, the future National Artist of the Philippines for Theater and Music (awarded on May 8, 1987 by Pres. Corazon C. Aquino) became the first Star of Philippine Movies.

THE ORIGINAL MOVIE QUEEN. At the age of 12, Rose Stagner was discovered for the movies by Mrs. Isabel Acuña-Nepomuceno, Jose Nepomuceno's wife. After a bit role in the silent horror movie Satanas (1932), Rose—now known as Rosa del Rosario—was launched as a lead star in Nepomuceno's Ligaw na Bulaklak (1932) opposite Rogelio dela Rosa.

Being half-American, Rosa was big for her age. She was what the Tagalogs refer to as "malaking bulas" and could easily pass for a young woman at age 12. Her first movie was such a hit that Nepomuceno made a movie shortly afterwards, again starring Rosa del Rosario, titled Lantang Bulaklak (1932), a sequel of sorts to her first movie as lead star.

These early movies of Rosa del Rosario carried different social and political themes, such as usury, patriotism and liberalism. Her movies not only did well in the box-office, but were always critically-acclaimed in terms of acting and production. With artistic and critical success under her belt, critics and the press of this period regarded Rosa as the Queen of Philippine Movies.

During the World War II, Rosa found herself in the safety of an elder brother in the United States. She made two Hollywood movies before she returned to the Philippines—Anna and the King of Siam (1946) as wife number 7 of King Mongkut played by 1940s Hollywood hunk Rex Harrison, and Border Bandits (1946) as leading lady to cowboy-movies star Johnny Mack Brown.

On her return to the Philippines, she made Premiere Productions' Bakya Mo Neneng (1947), which was a certified box-office hit and made her the highest-paid actress at the time. The movies Rosa made after this were less distinguished but were all financial successes that continued her reign as the undisputed queen of local cinema.

THE ORIGINAL DARNA. Rosa del Rosario's other singular achievement during the latter part of her movie career was her role as the first Darna, from Mars Ravelo's tremendously popular komiks creation Darna (1951). She was offered to play the role by her former Zamboanga leading man Fernando Poe Sr.

(Darna is the only local superhero that has been played a total of 14 times in movies, four times on TV, thrice on stage and twice in TV commercials.)

Rosa del Rosario retired from acting and migrated to the U.S. to live with her American husband John Samit after the release of her last movie, May Karapatang Isilang (1953), said to be the first Filipino movie to tackle the issue of abortion.

THE ORIGINAL SUPERSTAR. After Rosa del Rosario, the next highest-paid actress of the 1940s local movie industry was Carmen Rosales.

In 1939, Carmen applied for an acting job in LVN Productions but she was rejected for having "no profile." A smaller movie company, Excelsior Productions, took her in and cast her in the musical extravaganza Arimunding-Munding (1939).

After seeing the box-office success of Carmen's first movie, Sampaguita Productions cast her with their leading matinee idol Rogelio de la Rosa in the movie Takipsilim (1939). The move proved to be the start of what's regarded as one of the most successful romantic tandems of all time in Philippine cinema, the loveteam of "Mameng at Roger" or Carmen-Rogelio.

Ten years after LVN Productions rejected Carmen Rosales, the studio offered her P40,000—then an actors' highest rate—for her to star in the movie Kampanang Ginto (1949).

But her biggest and most memorable hit was her reunion movie with Rogelio de la Rosa in 1954, the love story-musical Maalaala Mo Kaya?.

Some movie critics and showbiz writers today argue that Carmen is the "Original Superstar of Philippine Movies." A Superstar, they say, is one who enjoys commercial success, a wide fan base and, at the same time, is also the toast of movie critics. In her heyday, Carmen fit the title on all three counts.

Carmen is a favorite topic of film buffs studying old Filipino movies. One such fan of old Pinoy movies is Jose Mari Lee who wrote in his Pinoy Comics-TV-Movies blog dated March 24, 2008:

"Carmen Rosales's performance made Ang Tangi Kong Pag-ibig (1954) a classic. In this movie, she sang, she danced and she acted.

"The Stanislavsky Method emphasizes the use of the voice and body as the tools of an actor. Carmen Rosales used both tools quite competently. Her eyes 'lead,' so to speak in Method Acting.

"Carmen Rosales didn't have to say anything to express an emotion. A stare, or a glance, or a wink, was enough for us to understand what she was trying to convey. She was most effective when a scene was quiet. There was one particular scene in Ang Tangi Kong Pag-ibig where she was wearing a surgical mask. It was an unforgettable closeup, for by just using her eyes she was able to emote a color swatch of emotions. All the loneliness, the pain, the confusion, the happiness and anger of the character she was portraying came to life."

LVN, Sampaguita, Premiere, and Lebran held the brightest stars and top artists of Philippine movies in the 1950s and 1960s.

THE ORIGINAL DYESEBEL. In 1953, another Mars Ravelo komiks character was given life in the movies. The very beautiful Edna Luna was cast as Ravelo's mermaid character Dyesebel.

Because of her classic beauty, Edna was often cast in period-costume movies and fantasy films, such as Haring Solomon at Reyna Sheba (1952), Pedro Penduko (1954), Ang Buhay at Pag-ibig ni Dr. Jose Rizal (1956) at Anak ng Bulkan (1959) where she starred with the late one-and-only King of Philippine Movies Fernando Poe Jr. and the very young Ace Vergel.

According to Simon Santos in his Video48 blog (May 4, 2008), Anak ni Dyesebel (1964)—her last movie before she retired from acting and headed to the United States—was Edna Luna's reunion with her original Dyesebel co-stars Jaime de la Rosa (as Fredo) and Carol Varga (as Betty).

Do you know more originals and firsts in the local movie industry? Feel free to share them in the comments section below.

We acknowledge Jessie B. Garcia's A Movie Album Quizbook (Erewhon Books and Magazines, Oct. 2004), which provided most of the information for this article. Credit also goes to Simon Santos's Video48 blogsite for most of the photos used in this article.