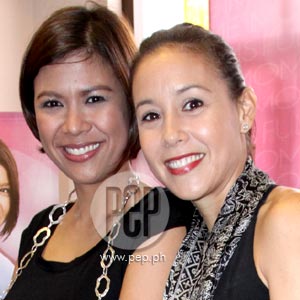 "It's comforting to know that other moms also experience the same thing," says Suzi Entrata-Abrera (left) about parenting issues. She and Christine Jacob-Sandejas (right) tackle good parenting on their new daily talk show called Full Time Moms, which will start on October 12 at 7:30 p.m. on Q channel 11.

Raising more than two children at a time is not easy. But celebrity moms Suzi Entrata-Abrera and Christine Jacob-Sandejas believe that proper discipline and quality time with parents would at least lessen the problem.

For former swimmer Christine, her biggest challenge as a mom is teaching her five kids the right values.

She said, "I guess the challenge is try to steer them into the right path, create the value-formation for them. This day and age, there are gadgets everywhere, so many distractions. So, my biggest objective right now in my home is to find a way that's straight path, stay away from all of these unnecessary distractions that could veer my children away."

Suzi, who has three children with TV personality Paolo Abrera, added that to achieve this goal, parents should allot special time with their kids.

The Unang Hirit host related, "At this point, they're all very young. My kids are ages six, four, and three. So, at this point, it's really giving them the kind of attention they want and need from a parent for their studies or whatever. It's being able to be with them para mas lalo nilang ma-develop 'yong mga special talent nila, para ma-encourage habang maliit lang sila."

A parent of two or more kids may have to face the issue of favoritism. But Christine seems to have learned a trick or two.

The former Eat Bulaga! host said, "Somebody told me this, 'Having five kids, you're supposed to take time out for each child.' I do this with my children. I take them wherever, you know, Jollibee, McDo, kaming dalawa lang. So, we can really have a pleasant conversation without the other kids butting in, 'Ako rin, ako rin!' Di ba, ganyan ang mga bata, minsan nagseselos? So it's always nice to set a special date with them and they really look forward to the date with mom and dad."

Suzi agreed by saying, "We haven't gone out on date yet but I've heard about that idea and I figured that's nice thing to do."

DEALING WITH RIVALRY. Another common situation between siblings are petty fights over toys or movies and TV shows to watch. Mommies Christine and Suzi share good advice about teaching toddlers to avoid such competition.

"With our kids, we have ruling diyan," Suzi said. "Kunwari, 'If you want to play with this, either with a toy or whatever, if you guys fight I have to take this away.' So sila tuloy, they have to figure out a way for them to have time for whatever they're playing because they know what's gonna happen when they fight."

Christine, on the other hand, lets her kids patch up their own misunderstandings.

She described a usual scenario at home. "Everyday in my house, ang ingay! But what I try to do when they try to fight is to figure out what happened, sino'ng nagsimula ng fight. Sometimes there's always one kid that starts the fight. I have a three-year-old na, 'what, whatever kuya ka'. So, ang hirap talaga, nagiging judge or jury ako. But to the older one, if I know that the fight is not so major, I'd say, 'Kayo na ang bahala. Fix your own fight because I won't be with you all the time to settle the differences.'"

REINFORCING GOODNESS. Of course, kids aren't always naughty, as some parents think. There are times when they do good deeds that easily charm their folks, and these should never be ignored. In fact, they should be acknowledged, if not rewarded.

As Christine said, "I thought it would be helpful that we always compliment a child when they did something good. If they share, like, ''It's so nice of you to share chocolate with your ate.' So, we try to always focus on the good remark.

"Surprisingly, they stop or lessen doing bad things. They always know na napapansin yung mga ginagawa nilang mabuti, at 'yong mga hindi masyadong maganda, e, parang pinagsasabihan na lang. We also punish, in a way, na we have time out. I don't spank. Normally, I warn them and if they don't [behave], they have to face the consequences."