Gerald and Aljur fans battle it out on Cosmo.ph--whose side are you on? 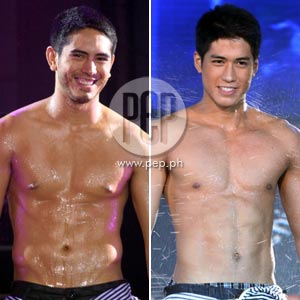 Even before the Cosmo Bachelor Bash night, the rivalry between Kapamilya hottie Gerald Anderson (left) and Kapuso hunk Aljur Abrenica had already begun (click here to read related article). It was intensified when the two shared the same ramp last September 10 at the actual event itself, and all the screaming ladies (and gays) present did not waste the chance to comp

They're both young, talented, and utterly irresistible.

One is a 20-year-old Fil-Am who is one of ABS-CBN's most prized male talents, while the other is a 19-year-old pure Pinoy who is being groomed as GMA-7's next big leading man.

The Cosmopolitan Bachelor Bash, which was held last September 10, ignited a word war in Cosmo.ph between the fans of Gerald Anderson and Aljur Abrenica.

Gerald and Aljur are two of the 10 Centerfolds who made it to Cosmopolitan Magazine's 2009 "Cosmo Men" supplement, which features only the hottest young male celebrities in the country at the moment.

The mestizo Kapamilya star may have landed on the cover of "Cosmo Men," and owned the finale during the Bachelor Bash event. But loyal Kapuso fans claim that all-Pinoy Aljur is worthy of cover boy-status, too, and more so because he gave quite a show by drenching himself with a bottle of mineral water onstage.

Both actors have come to accept that as they mature in the biz, their "images" are bound to go sexier. Aljur himself is comfortable with this shift. He said himself during his Centerfold shoot, "Sa palagay ko yung mga roles na binibigay sa akin habang tumatagal paseksi ng paseksi. From the very start naman ng showbiz career ko, nanalo kasi ako ng Ultimate Hunk sa Starstruck, so, kailangan ko talagang gampanan."

Gerald, on the other hand, while accepting that he has to mature from his teenimage, never thought he'd land on the sizzling cover of "Cosmo Men."

The former housemate of Pinoy Big Brother Teen Edition Plus said, "Being part of Cosmo is something I never imagined myself doing. Talagang wow! It's a big honor for me."

So, PEPsters, who do you think is the better hunk between the two? If you want more proof of each one's hotness, visit Cosmo.ph to see Gerald and Aljur's photo galleries and Bachelor Bash videos.