Dingdong Dantes says of Marian Rivera's skin when his hand touched her for the first time: "like clay that molded itself into my hand" 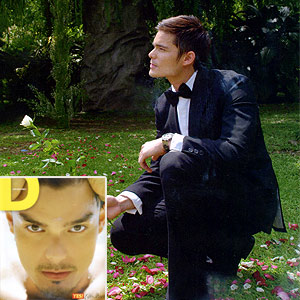 Dingdong Dantes fans have long awaited his return to primetime TV since his role as Homer in Ang Babaeng Hinugot sa Aking Tadyang. Thanks to Stairway to Heaven, that wait is finally over—but this time, instead of Marian Rivera, he is paired with the fast-rising Rhian Ramos. After last night, fans will get to decide whether they accept the Dingdong - Rhian tandem.

But even for Dingdong, questions of whom he should team up with would never even have happened if it were not for his highly successful teamup with Marian Rivera. That was in 2007, when GMA-7 did the local rendition of the hit Mexican 1994 TV telenovela Marimar. Some say it was fate that the two should meet, and some have even said that their first meeting was magical.

But in YES! Life Stories—a Summit bookazine whose first star subject is Dingdong—we learn that the meeting felt exactly the opposite for Marian!

"Hindi kami magkasundo. At all!" she laughingly exclaimed in her interview in the bookazine—a publication that is a cross between a book (in-depth text) and a magazine (photos, graphics). Actually, it was a disappointment for her to find a leading man who was a little remote and kind of snobbish.

Strangely, for Dingdong, there was something "special" about their chemistry! This he explains in a romantic metaphor. He describes the first time he held Marian for a scene in Marimar:

"When I held her, she was like clay that molded itself into my hand. It was like...my hand had its own place on her skin."

This left an impression on his mind, if only because the skin of some of the women paired with him in the past felt "rough" to his touch. He doesn't know why; he says maybe it was his touch that wasn't the right fit. But with Marian, her skin just seemed to fit perfectly in his hand, and from there grew a nice relationship between the two attractive stars that many surmise is today more than just a friendship.

How did the two get two different impressions out of the same experience?

Find out in YES! Life Stories Dingdong, a book-magazine which was made over six long months by the team that gives you YES! Magazine. Except that this bookazine has an extra-winning element: Dingdong Dantes himself put in time—from concept stage to pictorials to interviews to other shoot-production and post-production needs.

The fellow did not just sit and wait for the bookazine to come out. He even came to the office of Summit Media, which publishes YES!, a couple of times for discussions and for a check on the proofs. And this, besides the difficult pictorials and long interviews over several days that he did for the project.

Why, he even provided some of the shoot-production necessities! Such as costumes and props for his shoots as King Leonidas (think Gerald Butler of 300), as air-force pilot (think Tom Cruise of Top Gun), as savior to those in danger (think Christopher Reeves as Clark Kent and Superman), and so on!

And Dong scored points with the Summit editors when he repeatedly refused to have his pictures photo-shopped; i.e., altered! The extra flesh in the waist, the dirt on the arm, the veins in the arm, the blood-shot eye—all these stayed. Dong said he wanted to keep it real. Even if, from the corner of our eye, we could see his good-natured manager Perry Lansigan squirming in his seat.

Working closely with YES! contributing writer Andrew Paredes, Dong reveals himself in this publication like he has never done before. He talks about his childhood, his ups-and-downs in showbiz, his chosen causes, his family, friends, and even how he got such a name! Andrew, who happens to be an Atenean like Dong, captured it all with wit, too!

Edited by YES! editor in chief Jo-Ann Maglipon, the bookazine is filled with never-before seen pictures and ideas revolving around Dong's Reality, Dreams, Fantasies, and Perception. Art direction is by Summit Media group art director Nat Clave, who does an inspired job: it's classy, with little clutter, and with every icon and font completely thought out.

The whole package is a collector's dream.

All right, things change. We go back to the present pairing of Dingdong and Rhian, and we have to admit that this may also be the start of a wonderful working relationship that may also lead to more! For Dingdong and Marian's legion of fans, it's wait and see. However, they will not be shaken about Dingdong belonging only to Marian, and about any other female, including the very lucky Rhian, being acceptable only as Dingdong's working partner.

But do Marian and Dingdong really click? Do they actually like each other's habits? Do they talk a lot? Are they sweet off-screen? Are they on?

In YES! Life Stories Dingdong, Marian and Dingdong agree to a joint interview. It's a first for the print media! Read what they have to say about each other and judge for yourself: are they or aren't they? And even if you weren't interested in such things, read and learn. Dingdong is one star with a head on those sexy shoulders!

The limited-edition bookazine is available in all leading bookstores and newstands.

NOTE: PEP is the on-line affiliate of YES! Magazine. The two share the same editor in chief, who is also on top of YES! Life Stories Dingdong.