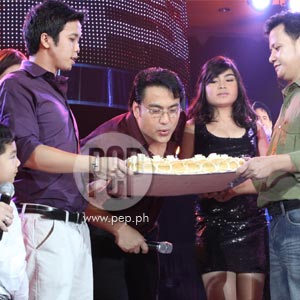 Surrounded by family and friends, Sen. Bong Revilla makes a wish and blows out his birthday candles. Later that night, he admitted having migraine attacks during the early part of his birthday bash, but he was happy because his guests braved strong rains just to spend the night with him and his family.

Even though a deluge of a storm is already threatening a giant flooding disaster in Manila that night, September 25, friends of Sen. Bong Revilla—some coming from as far as Cavite—pour into his 43rd birthday party at Whitespace, Pasong Tamo Extension in Makati City.

Due to heavy rains, guests are ushered into the venue using golf umbrellas. Parking is virtually non-existent on the clogged streets. The red carpet also redefines the word "glamour"—celebrities have to walk with poise on a slippery floor.

But, so what? The night belongs to their dear friend.

Patterned after his TV show Kap's Amazing Stories, his party carries the theme "Amazing Bong!" and recalls his good deeds and accomplishments.

TOP TEN. "Amazing Bong!" gives a rundown of the top ten accomplishments of the senator as a politician, actor, and family man.

As an actor, bigwigs in the local showbiz industry today, like Solar Entertainment's Wilson Y. Tieng and Regal Entertainment's Lily Monteverde, praise Bong for effectively legislating a bill that reduced the amusement tax from 30 to 10 percent.

The night's highlight is the turnover of his gift to the Mowelfund Film Institute: a life-size painting of himself as "Panday," and 500,00o pesos. Mowelfund's executive director Boots Anson-Roa personally receives and thanks Bong for his generosity.

Bong also surprises his guests with a raffle prize—a motorcycle from Suzuki, where the celebrator is a safety ambassador.

"NOBODY BUT YOU." After the video presentation, the party also prepares enough entertainment segments to fill one episode of SOP.

Immigration Commissioner Marcelo Libanan shows everyone how to play the guitar when he strums classic songs like Santana's "Maria, Maria" and "Smooth."

But the most-applauded part is Bong's dance number. To the tune of Korean hit "Nobody," even his grandson Gabriel Revilla, Jolo Revilla's toddler, joins in the dance and shows his cute moves.

Towards the end, Lani Mercado enters the stage and performs with her kids.

All in all, the night is a memorable one. Not for the rain, but for one "amazing" man who has been bringing sunshine into other people's lives.