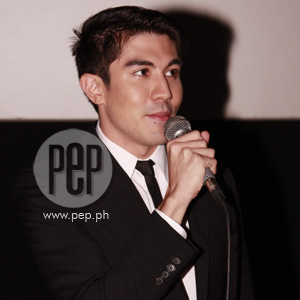 Luis Manzano made viewers cry for his role as Mark, the gay son of real-life mom Vilma Santos's character in In My Life. Luis offered his latest movie as a birthday gift to his father Edu Manzano.

Inside Cinema 7 of TriNoMa Mall in Quezon City, Luis Manzano declared that his new movie In My Life is his present to his father Edu Manzano, who celebrated his birthday last Monday, September 14.

"Isa itong very special gift. I'm not sure kung nandiyan na siya dahil hindi ko pa nakikita ang daddy ko. Dad, if you're there, I love you so much and this is also my birthday gift to you. Happy, happy birthday to you!"

Luis plays Mark, the gay son of Vilma Santos in the Star Cinema movie, which had its second premiere at TriNoMa last night, September 15. His character is the live-in partner of Noel (John Lloyd Cruz). Vilma plays a strict librarian named Shirley Templo.

What is Edu's reaction to Luis's statement that this movie is his birthday gift to him?

"I accept!" said Edu with a laugh. "I know it's a very big day for him. Mas mahalaga ito kaysa sa birthday ko. We're all here to support him."

Luis has already shown his competence as an actor. Where did he inherit this—from him or from his mother Vilma Santos?

What is his message to Luis?

"I guess the film will speak for itself. Alam kong matagal nang inaabangan ito and I'm sure they won't disappoint us."

Meanwhile, Luis gave his message to the fans who showed their support for his latest project.

Showbiz News Ngayon asked Luis to divulge the identity of the person who sent him flowers that night. The actor declined to reveal the giver, saying that he would like to keep it private.

In My Life is now being screened in 119 theaters nationwide.