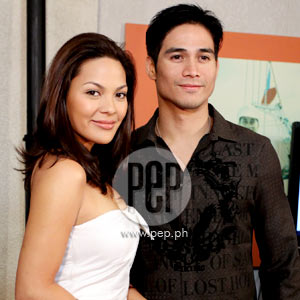 Piolo Pascual did not know what to say when he was asked what the real score was between him and Lovers in Paris leading lady KC Concepcion. This happened during the show's press conference last night, September 17, at the Dolphy Theater of the ABS-CBN building.

He also said it would be better if he and KC answered the question after the one-season only Pinoy version of the Koreanovela Lovers in Paris.

The multi-awarded actor and now-producer told the media: "Just to be fair to the show, parang gusto po namin na mag-focus muna ang mga tao doon sa character namin, kung sino si Vivian [KC] at sino si Carlo [Piolo]. Then, kung ano po ang mangyayari after the show, siguro it's better for us to answer that question. You know, just answer that after the show.

Several months ago, the two very attractive young stars were frequently asked about their relationship. It will be recalled that Piolo admitted on The Buzz that he was courting KC Concepcion and that he treated her as someone special.

FIRST TEAM UP. Both Piolo and KC shared the excitement they felt when they found out they would be working with each other in the romance-serye Lovers in Paris.

Since this is her first teleserye, KC was glad that she would be doing the project with her celebrity crush.

Piolo, on the other hand, feels blessed to be able to work with the daughter of Megastar Sharon Cuneta and former heartthrob Gabby Concepcion.

He stated, "Siyempre naman ang mabigyan ka ng ganitong opportunity, masasabi mo na ibang klaseng istorya naman. Very nervous [ako], but I'm very excited kasi makikita na naman tayo sa TV every night. Beyond that, I'm very excited because I'm paired with KC. That is a dream project for me. When it was offered to me, ang sabi ko talaga, 'With KC Concepcion, it's a blessing.'"

Although they have both decided not to talk about their personal relationship in public, Piolo admitted that he wanted to know more about his leading lady in this soap opera.

"It's a blessing that we got a chance to work together and mas maging close pa kami. Magkaroon pa ng magandang blessing na magkasama sa trabaho and mabigyan ng chance na to become closer not just professionally, but also personally," Piolo said.