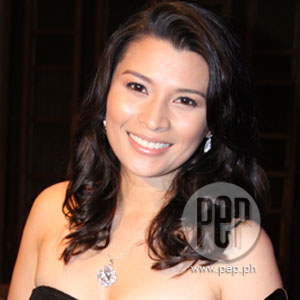 When asked about the status of her relationship with actor Paolo Paraiso, who fathered her two sons, Mylene Dizon said they're "just friends."

Mylene Dizon entered the CCP Little Theater just in time to receive her first Urian award for best actress last night, Sept. 19. She said the heavy traffic going to the Cultural Center of the Philippines in Pasay City prevented her from coming at the appointed time of 7 p.m. for the 32nd Gawad Urian.

Mylene was completely speechless when she won the award for her portrayal of a woman nearing death in the independent movie 100.When she went up the stage to receive the trophy, she couldn't think of anything to say. She said she hadn't expected to win.

This is her third time to win an acting award for the said role—the first award was from the 2008 Cinemalaya Film Festival, and the second was from this year's Golden Screen Awards.

The mother of two kids with Paolo Paraiso, whom she calls "just a friend," Mylene said the Gawad Urian was for her two children. In fact, her only escort to the awards night was her first son Tomas. She said she couldn't take her second son Lucas with her because "baby pa lang si Lucas, e."

Mylene revealed that Tomas, who received the trophy with her, is her lucky charm.

Mylene said that from now on, she will take Tomas to every awards night she will attend in the future.

PEP asked Mylene if she already told Paolo of her win?

HARD ROLE. What was the hardest part in doing her award-winning role?

But does she feel the hardship was worth it, after receiving the Urian?

Despite this, Mylene revealed that she is not ready to be lined up for a new project just yet.