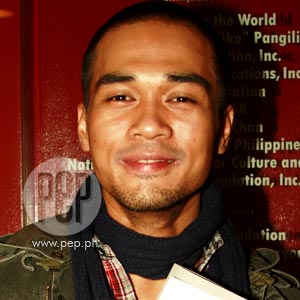 From Ligaw na Bulaklak to Your Song, newcomer actor Marc Abaya has been playing the role of a bad guy, a type of character which he has become more comfortable in doing. For him, "I like it kasi 'yon ang typecast sa akin, e. Madali lang sa akin ang magkunwaring ganung kasamang tao, e."

Marc Abaya has found another career in acting after his successful performance in Ligaw na Bulaklak and in Your Song Presents Babalik Kang Muli. The frontman of the local band Kjwan said that his stint in those two teleseryes encouraged him to continue his job as an actor.

In the two TV series, Marc played villain to Roxanne Guinoo and Cristine Reyes, the lead stars of Ligaw na Bulaklak and Your Song, respectively. The newbie actor admitted that he has become more comfortable in doing the role of an antagonist. He explained, "I like it, kasi yon ang typecast sa akin, e. Madali lang sa akin ang magkunwaring ganung kasamang tao, e. And lalaki ako, masarap maging angas as opposed to goody-goody."

However, before he gets credit for his acting in the said TV series, Marc reminded PEP that he really started acting in the long-awaited teleserye Habang May Buhay, which was initially called Narserye.

"I'm still working on Narserye which is now Habang May Buhay," he said, when asked about his next project.

He thanked the said series for giving him an opportunity to discover his ability in acting. Marc shared, "Inalagaan nila ako, they never abandoned me, they've always supported me. Maraming changes na nangyari and yet I remained there, so I will forever be grateful. Nandoon pa rin ako at binibigay ko pa rin ang lahat."

The band member turned actor was glad that his parents have been very supportive of his decision to enter show business.

He also acknowledged them both for giving him constructive criticism about his acting skills. He said, "Yong critique, mas si Dad, 'yong mga, 'Dapat, Marc, huwag masyadong ganito.' My mentor is my father, [actors] Nonie Buencamino and Johnny Delgado, of course, also [director] Laurice Guillen. They are my gods, sila ang mga idol ko, sila ang mga guro ko. They can make or break me with a word or tingin lang. Kung sabihin nilang 'japeks ka,' I'll cry and I'll feel really bad. Si Mom naman, it's either atom bomb or rain shower. So far, it's been rain mostly with my Mom."

He related how surprised he was when he found out that his mother watched all the episodes of Your Song.

He continued by describing Direk Marilou's reaction when he decided to give acting a try.

"Ever since the beginning, we were raised to make ourselves. For example, just to share, me and my brother, nagsimula kami sa business, nothing to do with my parents. Although some people think it's funny. Now that I chose to do acting... I mean, that's the biggest thing that my Mom didn't want me to do kasi si Mommy, gusto niya si Kuya Marco maging either pari or doctor. I think imposibleng mangyari.

"So, when I chose to do acting, she was quiet about it. She didn't wanna say anything 'cause she was highly against it. But again, at the end of the day, my family, we support each other, no matter what. So, Mom's been there, surprisingly, nice to me."

MUSICIAN-ACTOR. Although he's now more visible on television as an actor than as a musician, Marc said that he will never leave his position as vocalist of Kjwan. In fact, Kjwan released its third album, 13 Seconds to Love, under MCA Music last month.