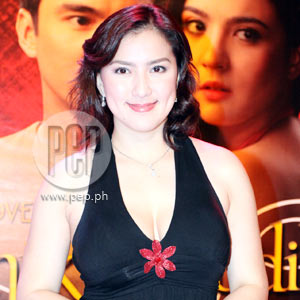 An exasperated Ara Mina snapped back at the entertainment reporters last night, September 22, at the press conference of GMA-7's upcoming afternoon offering Tinik sa Dibdib, held at Studio 5 of the GMA Network Center in Quezon City.

The sexy actress was obviously irked by the latest rumor linking her to Department of Interior and Local Government (DILG) Secretary Ronaldo Puno.

Ara surmised that the issue started after she referred the cabinet secretary to former actress-model Rochelle Barrameda, who at that time was seeking much needed support from the government to help her indict the suspected mastermind behind the gruesome murder of sister Ruby Rose Jimenez.

Ara's connection to influential political figures can be traced to her family lineage, being the daughter of former Quezon City Congressman Chuck Mathay.

ARA FOR COUNCILOR. Ara candidly revealed her plan to enter the political arena in time for the upcoming 2010 national elections.

The 30-year-old actress is setting her sights on a councilor seat in Quezon City's District 2—the same position desired by hunky actor Alfred Vargas.

Ara is not deterred by her lack of academic credentials—one area which her political rivals would surely attack as soon as the campaign period starts rolling.

The former Best Actress awardee proudly mentioned her charity endeavors focusing on ill children and those afflicted with Down Syndrome through her Ara Mina Foundation, Inc.

Ara is scheduled to fly to the United States for a series of shows together with sister Cristine Reyes, ex-Pinoy Dream Academy finalist Bugoy Drilon, and stand-up comedian Vice Ganda.