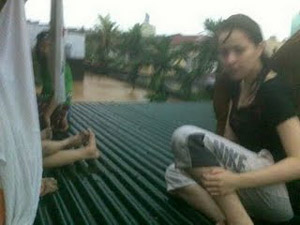 Cristine Reyes is now staying in the Quezon City home of her sister Ara Mina. To all PEPsters, we are launching a donation drive for the victims of Ondoy. If you wish to give in-kind donations, we listed down various drop-off points. Please CLICK HERE.

Cristine Reyes and her family members have been rescued from the rooftop of their two-storey house in Provident Village, Marikina City. Flashfloods caused by tropical storm "Ondoy" (international codename, "Ketsana") stranded the actress and her family on the roof for 12 hours, starting Saturday, September 26, at around 1:00 p.m.

When she saw a "flashlight" approaching them, she saw a ray of hope.

Richard narrated, "There was a point na talagang nagdadasal lang kami kasi ang lakas ng agos ng tubig, puwede kaming madala all the way to Riverbanks. I just did my own part to help out and to help out Cristine because she's my friend."

Cristine's voice broke as she thanked the persons who gave immediate help during her time of need.

First, she made mention of her siblings, who were the first to arrive on the scene using jet skis. "Unang-una, sa mga kapatid ko, dumating kayo. Pag [emergency] talaga, family ang maasahan mo."

And she thanked her sister Ara Mina, with whom she is staying now. "Sa ate ko, sobrang nag-alala siya."

In a separate interview with ABS-CBN, Cristine showed the remains of her flooded house to Mario Dumaual. Thick mud covered the floors and walls of her house, and family possessions were scattered everywhere.

Cristine Reyes is now staying in the Quezon City home of her sister Ara Mina.