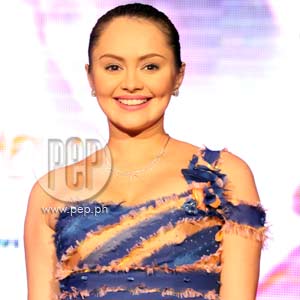 Like most mothers, actress Angelika dela Cruz relishes the responsibility that comes with child rearing.

Angelika gave birth to her first baby last March 20 via caesarian section at the UERM Hospital in Manila.

At the press conference of GMA-7's afternoon drama series Kaya Kong Abutin Ang Langit held recently at the GMA Network Center in Quezon City, Angelika engagingly shared with PEP (Philippine Entertainment Portal) how her son, Gabriel Casareo, would throw tantrums during long trips when not beside his mother.

Motherhood brought about drastic changes in Angelika's routine. A self-confessed hands-on mom who opted not to hire a nanny to assist her, the mestiza actress now consciously revolves her schedule around her son.

Iza Calzado takes on the role of Clarissa in the television remake of the 1984 Maryo J. delos Reyes film.

While portraying a past Gina Alajar role could be daunting because of the possible comparisons, Angelika—a veteran of the movie-to-television remake trend—simply shrugged off popular impression that she's pressured to deliver and live up to her predecessor's previous success.

Did she seek the advice of Gina (whom Angelika referred to during the interview as "Ninang") when she accepted the series?