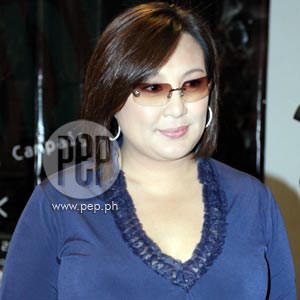 Megastar Sharon Cuneta says she does not plan to run for any public office. "No. I can do my little part in helping in my own little way from where I am. And I'm perfectly profitable here, so I don't need to be in public office. Twenty years ko nang sinasabi 'to."

The esteemed wife of Sen. Kiko Pangilinan said she felt "no regrets" when her husband recently backed out of his plan to run for vice president in next year's elections.

According to the Megastar, her husband did not consult her about his crucial decision.

"Actually, when he decided this, he didn't even consult me, yung decision niya to withdraw yung pagtakbo niya as VP. I don't remember. I don't think he consulted me," she said.

But Sharon added that she has long accepted this fact, because Kiko has higher priorities than his wife.

"Like I said kanina, Kiko has always been God first, and then country. He always puts country before himself, before his ambitions, so I think that's what's most important," Sharon explained.

But the Megastar added that the people most affected by Kiko's stalled VP run were his supporters, who had been working hard since May, when he publicly announced his bid.

"They've worked so hard for many months na, preparing sa next year. Yung isa, came to him na umiiyak, na nanghihinayang sila. He explained everything. He even sent me a text message na addressed to Team Kiko, now asking for their support kay Senator Noy [Noynoy Aquino]," she said.

FAMILY'S POLITICAL PLANS. PEP asked Sharon if she has plans to follow her husband's political path, to which she answered that she's more effective in showbiz than in government.

"No. I can do my little part in helping in my own little way from where I am. And I'm perfectly profitable here, so I don't need to be in public office. Twenty years ko nang sinasabi 'to," Sharon stressed.

But Sharon added that she would not stop any of her children from aiming for public office, especially now that her daughter KC Concepcion is an active ambassador of the United Nations World Food Programme.

But besides political plans, is she as kind to KC regarding marriage?