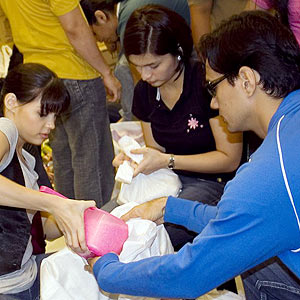 Some of the Kapuso stars who volunteered to repack relief goods that will be sent to the typhoon victims were Rhian Ramos, Pauleen Luna, and TJ Trinidad.

Several Kapuso stars continue to lend their hand in helping the victims of typhoon Ondoy by serving as operators in the Ondoy Kapuso Helpline and as volunteers in GMA Kapuso Foundation's Operation Bayanihan: Typhoon Ondoy.