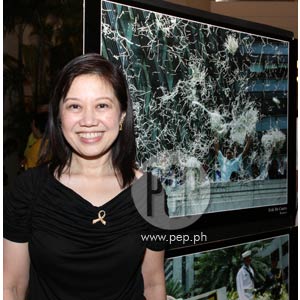 Pinky Aquino-Abellada, daughter of former President Corazon Aquino, poses beside one of the photos in Cory, Isang Pagpupugay, a photo exhibit that showcases the historic funeral.

Last August 5, thousands of Filipinos crowded the streets to witness the funeral of former President Corazon Aquino, one of the country's most respected leaders. There were some tearful loyalists who even followed the procession from the Manila Cathedral to Manila Memorial Park. The historic event was broadcast live on television, and witnessed by the whole world.

Now these moments can be relived by visiting Cory, Isang Pagpupugay, a photo exhibit that showcases 60 photographs taken by international photographers during the former President's wake and funeral procession.

In one photo, a man carries his son on his shoulders, helping him see the procession. In another, Cory loyalists carry an adorable stuffed toy that resembles Cory Aquino. One other picture shows Kris Aquino crying while looking out a window of the bus where her family was riding.

The photos capture Cory Aquino's enduring stature as an icon of democracy.

EXHIBIT LAUNCH. When the exhibit was launched in Rockwell Power Plant Mall in Makati City last October 26, members of the Aquino family expressed their gratitude.

Representing the family was Pinky Aquino-Abellada, one of Cory's four daughters. Also present were Mikee Cojuangco-Jaworski and Jackie Aquino, both nieces of the former President.

Atty. Alex Lacson, chair of TuloyPNoy, a pro-Noynoy Aquino advocacy group that organized the event, said the exhibit aims to carry out Cory's advocacy for freedom.

"Because you have to keep fighting for the freedom of the Filipino people... including inside the malls," he said.

PJ Castro, president of Kameraworld, the company that sponsored the reproduction of the photos, said the exhibit will be effective because photography is a good medium.

"We believe photos have the power to move, to inspire, to motivate. Specially, everyone has a camera right now, and so they have the power to get behind the legacy through our photos. We encourage photo-taking, so the next generation could remember what our generation has done for them," he said.

The Ryan Cayabyab singers performed nationalistic songs for the audience. Refreshments were also served after the event.

The exhibit can be viewed at Rockwell Power Plant Mall until November 4. It will move to Cebu this November.