Johnny Delgado remembered with love on last night of his wake 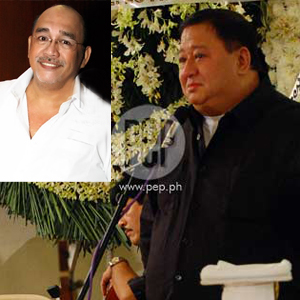 Director Edgar "Bobot" Mortiz (main photo) was one of Johnny Delgado's friends who paid him tribute during the last night of his wake at Our Lady of the Mt. Carmel Shrine in New Manila, Quezon City. Edgar told a funny anecdote about Johnny but later turned teary-eyed as he ended, "I will truly miss him."

"I love you." These were Johnny Delgado's favorite words to his friends and, most especially, to his family when he was still alive. "He was always the sweet, bubbly and helpful person," his friends attest.

Johnny Delgado died peacefully last November 19 at 1:00 p.m., after two years of battling lymphoma, or cancer of the immune system. He was 61. He died with his immediate family—wife Laurice Guillen and daughters Ana and Ina Feleo—beside him.

Delgado's wake was held at the Our Lady of Mt. Carmel Shrine in New Manila, Quezon City. His interment was held at the Loyola Memorial Park in Marikina City last November 24.

Friends and relatives came to pay respect to one of the finest actors in Philippine showbiz on the last night of Johnny's wake.

During the last night of the wake, November 23, PEP (Philippine Entertainment Portal) saw the following big names in the entertainment industry:

Most of the actors and actresses at the wake were Johnny's contemporaries, or younger stars who had worked with him:

The mass was celebrated by Father Jerry Orbos, SVD. Tirso Cruz helped by leading the eulogy with his guitar, together with Al Tantay.

FRIENDS PAY TRIBUTE. Edgar Mortiz related his unforgettable moments with Johnny. "I will truly miss him," the teary-eyed Direk Bobot said while reminiscing times with Johnny. He said he treated Johnny like his own brother and always said "I love you" to him. Bobot also offered the American Pop Standard, "I'll Be Seeing You" to Johnny, with Tirso on guitar.

Christopher de Leon also shared his funny stories of Johnny Delgado. His first anecdote was about Johnny's habit of improvising his lines: "Johnny loves adlibbing so much that he gets lost on the main focus of a story. One time, instead of saying 'Sisibol ang bagong araw,' Johnny said, 'Bukas, sisibol bungang araw.'"

Johnny was a fun guy to be with, recalled Boyet, who enjoyed being with Johnny and his siblings. Johnny once saved his life while they were scuba diving in the '80s.

Being adventurous, they tried swimming in a diving spot in Anilao, Batangas, called "stairs." It was getting dark at 5:30 p.m., and they decided to swim 120 feet below. But while swimming downwards, Boyet suddenly hyperventilated and started to panic. Johnny came to his aid while he was panicking and was about to punch him. But Boyet nabaged to calmed down while Johnny brought him to the shore.

Johnny asked him if he was all right. He nodded his head to say yes. Then Johnny exclaimed, "Anak ng tupa naman, o! Pinanerbyos mo 'ko!"

"It's an honor for me... it's an honor for us to be part of Johnny's life, for him to be very close to Sandy and I. He was very protective as a brother," Christopher said in closing. He sang Skylark's "Wildflower" afterwards for Johnny.

Tirso lauded Johnny for his frankness. He would tell you right away that he didn't like what you did if it was something wrong. "When you think about it, mas maganda yung kaibigan mo ganun kaysa yung lolokohin ka," Tirso said. He later sang Eric Clapton's "Tears in Heaven" for the late actor.

FAMILY'S TURN TO HONOR JOHNNY. Johnny's brothers then shared their memorable experiences. One of Johnny's brothers, Bobby Feleo, said that Johnny was really "makulit" and always loved to have fun.

One time, while they were still in Letran, Johnny decided to drive the car in reverse just for fun. "'Tol, hindi ko gagamitin ang preno hanggang sa umabot tayo sa bahay," Johnny jokingly told his brother. Many years later, Johnny's brothers promise to take care of Laurice and his daughters now that he is gone.

Johnny's daughter Ina Feleo was next to speak in front. She began by saying she wrote all her thoughts in a small notebook because she knows that if she doesn't write things down she won't be able to say anything.

"Ngayon pa lang nami-miss ko na siya," Ina read aloud while tears rolled down her cheeks. Her sister Ana stood beside her. Ina pointed out that her dad told her once: "there doesn't have to be an occasion for you to write somebody."

So, when she was still a kid, her dad told her to write him always a letter even if it was brief because he liked receiving letters. He kept them, placed them in front of his desk, so that he could always see them.

Ina continued, "Daddy had so much faith in me. We would sit for hours talking about my future, he had so much dreams for me. I never understood why he was in such a hurry that I'd reach them, he seizes every moment," Ina narrated. Her dad always told her that she can do everything as long as she uses her heart. "He was the courage I never had on my own."

Ina also shared how much her dad loved embracing the image of Mama Mary. Johnny always embraced Mama Mary through all the joy and sufferings he went through. During his last days, when he was getting weaker, Ina would bring Mama Mary near him and his eye would be fixed on the image.

Johnny's eldest daughter, Ana Feleo, described her father by saying, "If galit siya sa iyo 'wag kang magpakita, pero kung mahal ka niya lulunurin ka niya sa pagmamahal." She related how she grew up seeing her dad full of energy, always happy and cheerful. That's why it was really painful for her to see him in pain. Ana said her dad told her, "Ana, mangarap ka nang mangarap. You spend a day just thinking about it, just dreaming about it, and then gawin mo."

"God's will be done," this was Johnny's response when they learned he had cancer. "There was no bitterness, there was no anger, he didn't blame God. Instead he said, 'Baka kailangan 'to, kailangan 'to ni Jesus.'

"He isn't mushy but I will surely miss his simple text messages, our lunches together because we're so tight. We're only four in the family," Ana said. She also added that her dad deserved to be happy and that she would never leave their family because that was the last wish of her dad.

Johnny's wife, director Laurice Guillen was the last to deliver her eulogy. She said that she is floating in all the love and prayers that everyone has given her husband and her family. She also made a list of people she wanted to thank. She was very careful not to miss anyone. She thanked everybody who was with her husband when he worked in theater, television, and movies, "Dahil ito ang nagbigay ng hanapbuhay at kahulugan sa kanyang buhay," she said.

Actor Ricky Davao was the very last to pay tribute. Dedicating the song to Johnny, he rendered his own version of Louie Armstrong's "What a Wonderful World," with some changes towards the end of the song.


Click here for BATCH 1, BATCH 2 and BATCH 3 of the memorial mass that took place last at the our Lady of Mt. Carmel Shrine in New Manila.

Click here for the BURIAL of Johnny Delgado at the Loyola Memorial Park last November 24, 2009.