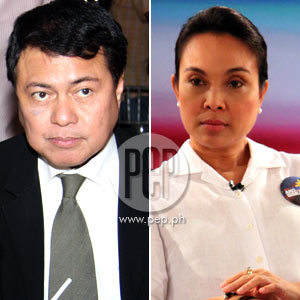 Senator Loren Legarda has found "the one."

Yesterday, November 18, Legarda officially announced that she has accepted the offer to be the running mate of presidential aspirant Senator Manny Villar.

In a press briefing held at Villar's residence along Shaw Boulevard in Mandaluyong City, the former broadcaster said she believes they "share many things in common," such as the vision to free the country from "poverty and despair."

Villar said the team-up was based on the congruence of their plans for the country.

According to Lito Banayo, Escudero's campaign manager, Escudero did not approve Villar's invitation because of principle.

Escudero's exit from NPC left Legarda, who had already announced her intention to run for vice president, without a running mate. And although she has emerged as NPC's torch bearer for the elections, her newest decision to ally with Villar does not ensure a merger between her party and Villar's Nacionalista Party. The NPC added that its support for Villar is not guaranteed.

This year, Villar was ranked ninth among the richest people in the Philippines, with a $530 million net worth. The real estate developer also resigned from his post as Senate President last year after he was accused of masterminding corruption in a road extension project. Legarda was one of the senators who immediately voted to install Senator Juan Ponce Enrile in Villar's former position.

This is the second time that Legarda will run for vice president. In 2004, she lost to Noli de Castro when she run as the running mate of action star Fernando Poe Jr.

The announcement of the Villar-Legarda team-up came two days before the start of the filing of certificate of candidacy, which will start on Friday, November 20.