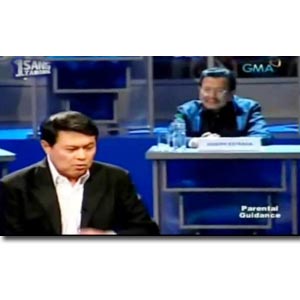 Former President Joseph "Erap" Estrada (background) beams as Sen. Manny Villar tackles a hard question in GMA-7's Isang Tanong. Villar was asked by UP Economics Professor Solita "Winnie" Monsod about his alleged corruption practices, which are said to be comparable to those committed by Estrada.

Last night, November 22, GMA-7 premiered Isang Tanong, a News and Public Affairs feature that serves as an early primer to next year's national elections. Throughout the two-hour program, presidential aspirants were asked the most burning questions that affect Filipino voters.

The show had three rounds. In the first round, each candidate was asked three questions–the first from a GMA-7 news anchor, the second from the panel, and the third from a pool of questions sent by viewers of GMANews-tv.

Only two minutes were allotted for each candidate to answer each of the first two questions; only one minute was given to answer the third one.

In the second round, the candidates were asked to answer the same question from one mystery asker, who turned out to be CNN Hero of the Year Efren Peñaflorida. The founder of Dynamic Teen Company asked the candidates, "Paano ba maging bayani?"

For the third round, which will be shown in next Sunday's episode, the presidential aspirants will be given a chance to ask a question to co-aspirants.

NOYNOY AQUINO. Sen. Noynoy Aquino was the first on the hot seat during round one. The first question by Mel Tiangco obliged the Ninoy and Cory scion to round up his accomplishments as a three-term congressman and current senator. He mentioned three of the laws he authored.

Lastly, Aquino randomly picked a viewer-sent question. Would he readily relinquish his post as president if he were accused of corruption? Aquino said he would not immediately step down from power, but would appeal to due process. He gave the assurance that he had not used the government for his own gains during his terms as solon.

Mel Tiangco asked Delos Reyes if he thinks he could win even without much-needed political machinery. The two-term Olongapo councilor appealed to everyone to change the country's electoral system by voting for someone who does not rely on these machineries.

UST student Jeanne Castillo asked Delos Reyes why he is against the controversial reproductive health bill. Delos Reyes said its main argument, that overpopulation is a problem, is a myth. He said vast unoccupied lands exist in the Philippines, proving that the country does not have a population problem. Congressmen and big businessmen should distribute these lands to the poor, he said.

Delos Reyes also explained that contraceptives being pushed among women today have been proven dangerous to their wellbeing. He appealed to the government to strengthen the implementation of laws protecting women.

What are his reasons are for running? asked a viewer.

To the last question on how to be a hero, Delos Reyes replied that the youth must venture into the "dirty world" of politics. "Kailangan magsakripisyo na pasukin ang maduming pulitika. Kailangan linisin ang pulitika... Yung mga kabataan na may kakayahan, pasukin 'yan," said the Ang Kapatiran Party standard bearer.

ERAP ESTRADA. Jessica Soho asked former President Joseph "Erap" Estrada why he wants to run again. Will it be "serbisyo or bawi?"

Estrada explained that he does not harbor vendetta anymore because his former opponents have "sided" with him.

"Vindicated na tayo... nilitis tayo, walang napatunayan," he said. "That court was created to convict me." His main goal for another term in the top position in the land, he said, is to continue his pro-poor programs.

Student Council President Aimee Jane Chua of DLSU asked Estrada if he remembered any error he had committed in his last presidential term.

On a viewer's question about the solution to corruption, Estrada said it could only be remedied by political will. Before solving this problem, however, Estrada said the government must first ensure food security and peace and order.

BAYANI FERNANDO. In response to Jessica Soho's question, MMDA Chair Bayani Fernando denied he's a dictator, or that he does not believe in democracy.

PBA's Atty. Victor Lazatin asked Fernando if he would continue his campaign in spite of garnering low points in surveys. The three-term former Marikina City mayor said he believes the ranking will improve once the Filipinos comprehend his policies.

To be a hero, Fernando jokingly referred to his first name. "Pangalanan ka ng tatay mo," he said, soliciting laughter from the panel.

NICANOR PERLAS. United Nations consultant and outspoken environmentalist Nicanor Perlas said he is pro-divorce. In reply to Arnold Clavio's question, Perlas said this additional law will "formalize" the rise in separation from marriage in the Philippines.

PDI's John Nery then asked Perlas to compare his enviromentalist platform to that of Sen. Loren Legarda's. The vice presidential aspirant is known for her Green advocacy.

"Hindi po ito simple environmental agenda. Magka-ugnay-ugnay. Mga nagawa ko, kaiba kay Legarda... Hindi po naka-focus sa kalikasan, kundi kabuuan," he said, adding that problems in the environment are connected to every other problem in the country, like corruption and lack of peace and order.

A viewer asked Perlas about his opinion on the Millenium Development Goals (MDG), sanctioned by the UN to "respond to the world's main development challenges."

Perlas said he's quite familiar with the MDG because of his work in the UN, and that it will be part of his platform.

GILBERT TEODORO. Lakas-Kampi-CMD and administration bet Gilberto Teodoro denied that his low ranking in surveys has to do with his association to Pres. Gloria Macapagal-Arroyo.

In his answer to Arnold Clavio's question, the Master of Laws graduate from Harvard Law School in Cambridge said his low ranking may just have something to do with less exposure on television, brought about by his hectic work as the former secretary of National Defense.

IPER's Mon Casiple asked Teodoro about his plans to solve the country's insurgency problem. Teodoro said the government should invest more in the armed forces.

A viewer then asked Teodoro if he would agree to have his assets "frozen" if he wins the presidency. Teodoro declined, but said he advocates greater transparency in government funding.

To stamp out corruption, Teodoro said government officials and employees should be given more "motivational schemes," like bonuses and tax incentives.

To answer Vicky Morales's question about his winnability, Villanueva claimed he was cheated out of the presidency during his last run. The Bagong Pilipinas political party standard bearer added that he's now more than ready to go on a nationwide campaign.

What are his plans for the middle class? asked a viewer. He said his platform will involve "tunay na pagbabago mula sa mahihirap patungo sa mayayaman."

On being a hero, Villanueva said a hero should not be "beholden" to other powers.

MANNY VILLAR. Multi-millionaire Sen. Manny Villar was the last presidential aspirant to take the hot seat. Vicky Morales asked him what his stand is regarding the alleged corruption in Arroyo's administration. Villar replied that his Nacionalista Party actually led the investigations against the President.

UP Economics professor Solita "Winnie" Monsod compared Villar's alleged corruption practices to those of deposed Pres. Estrada. Why should the people vote for Villar, who allegedly used his government seat to enlarge his wealth, just like Estrada?

In reply, Villar claimed that the accusations against him, like the alleged double insertion of funding for the C5 road project, were false.

A viewer then asked Villar what his plans are to uphold labor rights. The realty developer answered that he wants to create more jobs for the people.

The third round of Isang Tanong will be aired next Sunday, November 29, in the timeslot of SNBO.