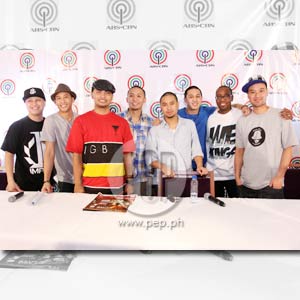 Jabbawockeez joins the Kapamilya station. Its members are expected to perform regularly in the Sunday variety show ASAP XV.

They danced and grooved to funky beats with a style they can truly call their own. They conquered the dance floor, but never thought they would be renowned worldwide. Oddly named, the Jabbawockeez is the dance crew that has appeared in the three seasons of America's Dance Crew as well as The Ellen Degeneres Show, Dancing with the Stars and the MTV Movie Awards.

According to the boys of Jabbawockeez, when they formed the group they were just thinking of impressing the girls more than sharing their flair for dancing. But as they progressed from being a mere garage dance group to the coolest crew in the world, they found a deeper reason for every routine they perform—inspiring the kids.

From simply doing it for fun, they added passion and dedication to their craft. Eventually, they got the nod of their respective parents.

"It was really a cool feeling to change our parents' minds. For us to be doing this, I think it's really a new movement for the younger generation to show that heart and pursuing a career that's not so conventional is definitely possible," shared Phil Tayag.

Jeff Nguyen explained further, "It was something that gave us an identity. The way that music makes us feel... I can't really describe it in words. It's something that makes you do what you love to do. We danced behind the artist, but now we are the artists. It's just a huge accomplishment to us as artists and to the dance community to show that we're not just background dancers. What we do is an art. It takes a lot of blood, sweat, tears and all that."

"GETTING TO KNOW YOU..." Aside from their trademark dance moves, the Jabbawockeez are also known for their iconic white masks. At the press junket held last Friday, January 29, at the ABS-CBN compound, the boys shed those masks to share a thing or two about themselves.

"I am 28 years old. Born and raised in Phoenix, Arizona. I'm a Virgo. I like long walks on the beach. And I am single," said Jeff "Phi" Nguyen. He got his moniker from his grandmother—it means "phi"-nomenal.

Rynan Shawn "Kid Rainen" Paguio is a 28-year-old Filipino. "I spent a lot of my life moving around a lot. But I was grounded in San Diego most of the time. My family is actually from Cavite and Bataan, and also in Iloilo. And I am married," he revealed.

"I'm kinda scared to tell what my status is. They might throw tomatoes," joked Kevin "Keibee/KB" Brewer. "I am 33 years old. I was born in Long Beach, California. I have two wonderful mixed-race children—half-Filipino. I am married. I am really eager to learn the Filipino language, Tagalog, so please, show me the way."

"We've been dancing with each other for so long. We've been in the same group since I was like 14 years old," shared the 25-year-old "SB," whose parents were from Las Piñas and Alabang. "It's just very exciting to be in the Philippines and see where my family is from."

Ben "B-Tek" Chung is a Korean. "I was from Los Angeles, California. Born and raised out there. I am 28 years old and I am also single," he said.

Another Filipino in the group is Chris "Cristyle" Gatdula who was born in Cavite. "My dad was from Tanza, Cavite. My mom was from Indang, Cavite. I am single, too," said the 28-year-old Caviteño.

"My name is Joe Larot. I was born in Sacramento. My family was from the Siquijor island," said "EmaJOEnation/Punkee," introducing himself. "I am single but I have a very important girl in my life—my daughter. And, I like to dance."