ELECTION WATCH: Joy Belmonte says her father did not react harshly to Aiko Melendez's tirades against her 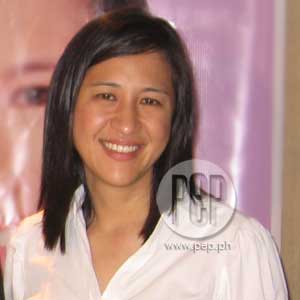 Joy Belmonte was in a bubbly mood when she was introduced to the press. She also cleared herself from several allegations of her "lack of experience" in governance, from opponent Aiko Melendez. (CLICK HERE to read related story.)

She said that although she has no experience serving in an elected position, she has already served many years in public service, through several non-governmental organizations (NGOs).

Concern for the plight of the poor, therefore, is inherent in her, Joy said.

Belmonte further noted that her NGO experience makes her more effective than a politician in poverty alleviation.

"Ayon sa ADB reports, halimbawa, one of the reasons why we are unsuccessful with poverty alleviation in our country is because there's too much politics, and politics hinders genuine reforms and genuine change," she said.

POVERTY ALLEVIATION. Belmonte said her number one priority as vice mayor would be solving poverty. According to the Quezon City Urban Poor Affairs Office (QC-UPAO), around 200,000 families in the city are informal settlers.

To help infomal settlers get more decent homes, Belmonte said she wants to create a lot of jobs.

FATHER'S REACTION. Joy Belmonte told the press that her father, Mayor Belmonte, did not react harshly when actress-politician Aiko Melendez's tirades against her came out in the media. The actress will also run as vice mayor with former Secretary Mike Defensor as her running-mate. (CLICK HERE to read related story.)

Joy added that Mayor Belmonte thinks Aiko Melendez has the right to run for vice mayor.

FAMILY. Joy Belmonte is married to Raymond Alimurung, who graduated Medicine from the University of the Philippines in Manila. He also finished an MBA degree in Stanford, and is currently working in Amazon.com in the United States.

The couple have a one-year-old son named Gael, who accompanies his mom in her meetings and other events related to the elections.

The candidate for vice mayor is an archaeologist by profession, and specializes in colonial period archaeology. She has led excavation jobs in Intramuros, Cebu, Batanes, and Cavite.

WHY NOT MAYOR? One of the main reasons Belmonte is joining politics is to continue the programs of her father, who is running for congressman.

She said she decided to run for vice mayor instead of mayor because Mayor Belmonte has already endorsed incumbent Vice Mayor Herbert Bautista to run for the top city post.

She added that she wants to do politics "one step at a time."

(CLICK HERE to visit PEP Election Watch, and read the latest news about the May 2010 elections)