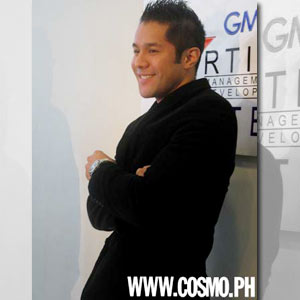 Fans of Victor Aliwalas may join the Celebrity Dating Game by logging on to Cosmo Chat (Click here), February 10, from 3:00 p.m to 4:00 p.m. Be sure you're a registered Cosmo.ph member and you're logged into your account when you enter the chatroom. If you're not yet a member,

Fresh off the conclusion of his GMA-7 afternoon drama Kaya Kong Abutin ang Langit and his breakup with his non-showbiz girlfriend, next on Victor Aliwalas' agenda is finding a Valentine date, and he's doing it in cyberspace!

The hunky GMA talent is set to take part in the Celebrity Dating Game on Cosmo.ph, the online home of Cosmopolitan magazine, February 10, from 3:00 p.m. to 4:00 p.m. Victor will be logging on to the Cosmo chatroom to get acquainted with members of Cosmo's online community, and to pick one lucky chatter to go on a Valentine date with him on Friday, February 12.

The 26-year-old actor-model—despite being hailed recently as the male Model Star Awardee for the Philippines at the 2010 Asia Model Festival Awards held in Seoul, Korea—remains very modest about his good looks and his artista status. The Ohio-born and bred actor relates that his Stateside friends, after finding out about his involvement in the Celebrity Dating Game, couldn't help but laugh. "They were like, 'Win a date with you? Pa'no yun?! How did you end up doing this?' Talagang iba ang buhay ko [in the States]."

But he assures the ladies who plan to join the Celebrity Dating Game that he's just a regular guy. "To all the girls out there, there's no need to be intimidated. I'm just a normal guy," he says. "Of course, everybody thinks sa unang tingin, 'O, artista pala siya, siguro mayabang 'yan.' Pero hindi totoo 'yan," Victor continues.

He doesn't mind going out with a girl who doesn't speak much English. In fact, he'd appreciate being given a Tagalog lesson. "Inglesero ako, di ba? Medyo baluktot ang Tagalog ko. Even if the girl speaks straight Tagalog, okay lang sa akin yun 'cause she can help me. I can learn from that. Kahit English, kahit Tagalog, we can teach each other."

A word of warning to those who hope to go on a romantic night out with Victor: one of his major dating pet peeves is rudeness. "If they're rude to the service people, it shows a lot about their personality. You have to observe how they act around other people. If they're not polite, pangit yun. That's a turn-off. How would she treat your friends or your family if that's her attitude? I think being polite is a very important trait."

The special Valentine date will see Victor and his Cosmo chick of choice dining at Museum Cafe in Greenbelt 4 and going for a fun videoke session at Red Box Karaoke in Greenbelt 3. The lady Victor picks will also win a complete date outfit from The Ramp Crossings, a free makeover at Studio Fix by Alex Carbonell in Greenbelt 5, and flowers from San Ramoune flower shop.

Looks like she's going to be one lucky lady indeed!