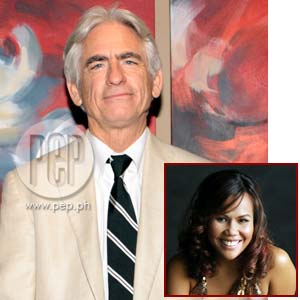 David Benoit plans to celebrate Valentine's Day here. After his concert, he'll do some sightseeing in Tagaytay and eat at Antonio's. "Just me and my wife," he says. One of his guest performers will be singer Bituin Escalante (inset).

David told PEP (Philippine Enterntainment Portal) in an interview that his performance will "come from the heart." Moreover, expect his timeless classics—like Promise Me a Carousel, Key To You, After The Love Has Gone—to mesmerize Pinoys once more.

A multimedia presentation that will highlight the latest campaign of DOT (Department of Tourism) will feature one of his most popular songs, "The Land of the Loving."

This isn't his first time in the Philippines, but he's brimming with enthusiasm. "I look forward to the people and how nice they are, accommodating...I think that's the very thing I love about the Philippines, the Filipino people," he said.

THE CONCERT. The five-time Grammy Awards nominee will be performing with the 60-piece FILharmoniKA Orchestra, conducted by Gerard Salonga, whom he described as "very young, very passionate, and has a lot of energy."

David's guest singer will be Bituin Escalante, who thinks of the pianist-composer-producer as "an inspiration to all artists who want to take the road less travelled;" plus, saxophonist Tots Tolentino.

The concert is not just for jazz lovers. David said his music is attuned to the taste of all people who believe in love. "The people here love ballads. The romantic part is the common denominator of my work, and the Filipino music."

DREAM PROJECT. Radio station 106.7 Dream FM is ecstatic about this project with David.

Program director Robyn Narciso recalled that the pianist's music became one of the motivating forces that propelled the station's pioneers Mr. Mari Lagdameo and Joppy Gutierrez to dedicate its airtime to smooth jazz.

(Smooth jazz, according to Wikipedia, "merges the instrumental virtuosity and improvisation of traditional jazz, with a modern, electronic sensibility." Soprano saxophone is said to be widely-associated to this genre, which is heavily influenced by R&B, funk, rock, and pop music styles.)

Narciso said, "When it comes to smooth jazz, the name David Benoit instantly comes to mind. And certainly, his music was a constant in the entire musical process of selecting what would fit with the station's format."

David—who already collaborated with famoust artists, like Patti Austin, Kenny Loggins, Faith Hill, to name a few—popularized the smooth jazz genre via his album This Side Up, which was released in 1986 and tagged as a "technically brilliant" work.

And so long as he lives, the future of the said sub-genre will not be bleak. David said, "The fun thing about jazz is you can mix hip hop, punk, RnB, and even classical. It's different and fascinating kind of music, and our listeners will keep on exploring and trying and mixing and matching."

David left an advice to all budding musicians: "Keep practicing, just follow your dream, and stay with it."