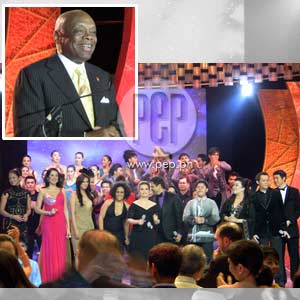 The network's Studio 10 was witness to the gracious welcome extended by ABS-CBN executives to members of the San Francisco-Manila Sister City Committee (SFMSCC), and guest of honor Hon. Willie L. Brown.

Brown, a former mayor of San Francisco who served in office from 1996 to 2004, accompanied the committee to Manila for a series of meetings with Philippine government officials. The committee also donated to ABS-CBN $10,000 to help in the network's efforts to clean up the Pasig River.

In a pre-show speech, ABS-CBN Foundation Managing Director Gina Lopez thanked Brown and the committee for the donation.

"Mayor Willie Brown has always been an ally... an advocate for Filipino-Americans," she told the members of the committee.

ABS-CBN President & COO Charo Santos Concio, meanwhile, praised Brown for his help to TFC (The Filipino Channel) in its efforts to reach Filipinos in the U.S. The American politician was instrumental in the success of TFC in the United States.

"This would not have been possible without Brown... he lobbied to put TFC in cable homes," the host of Maalaala Mo Kaya said.

PERFORMANCES. In gratitude, ABS-CBN hosted a a luscious all-Pinoy dinner for Brown and his company, complete with a mini-concert featuring some of the network's brightest stars.

In the pre-dinner show, the guests were treated to the live shooting of a documentary titled Harana. Directed by San Francisco-based director Benito Bautista, Harana aims to immortalize the traditional Filipino serenades.

The last production number featured distinguished Pinoy artists Lea Salonga, Dulce, Bituin Escalante, Michael Williams, and Robert Seña performing the greatest songs ever performed on Broadway, including "At The End of the Day" and "I Dreamed a Dream" from Les Misérables.

The finale brought all the artists back to the stage singing "Heal The World/We Are The World."

Truly, the evening not only aimed to honor San Francsico Mayor Brown and the San Francisco-Manila Sister City Committee, but also to showcase unique Filipino culture through music and dance.