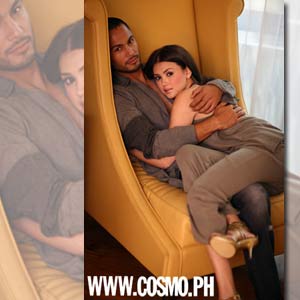 Visit Cosmo.ph to check out the "10 Things Derek Ramsay Loves About Angelica Panganiban" and a photo gallery of the couple's Cosmopolitan c

Derek Ramsay's love for actress Angelica Panganiban is 100% real. You can tell by the way he holds her hands, looks into her eyes, and talks to her in hushed tones, as if they were in their own little world and there were no one else in it but them. "When I'm out and I'm with her, I don't care if people are looking. I definitely like to show my affection. It's the same with her. We're not embarrassed or shy about it," Derek casually states.

The morenohunk admits that working with Angel in their first joint movie project, I Love You Goodbye, was "very hard and very uncomfortable. I'm used to seeing Angel in a certain way. That's why I say it's her best performance to date because when the director says action, it's like I'm talking to a totally different person. It's just really weird. And the kissing scenes, the bed scenes, I thought it'd be so much easier, but we both found it a lot harder," he recalls.

The Habang May Buhay star is proud to say that he doesn't get jealous, even though the Rubi leading lady has bared her skin in men's magazines, and has shared intimate scenes with other actors. "It's not a problem for me. There's no emotion, it's just all physical."

A vital factor that has made their bond last through all the wear and tear that come with being a celebrity couple is trust. "When you don't trust someone, that's when you can get jealous. With me, I give her 100% trust. She can go to a party, guys can go flirt with her, and I'm sure she'll handle her business. It's the same with me: if girls flirt with me, I'll handle my business. At the end of the night, [Angel and I] will go home together," Derek relates.

This rock-solid trust prevails even in the face of the nastiest showbiz rumors, the worst of which is a report that claims Angel broke up with Derek because she found a used condom in his car! When asked how he handles such gossip, Derek replies, "Just in one ear and out the other. When you know the truth, why make patol?"

A lot has been said about Derek and Angel's seven-year age gap, but the 30-year-old actor is unfazed by such comments. "It takes a lot of understanding on my part that she's only 23. But what people don't know about Angel is she's very mature for her age. She's been the breadwinner and she's been in the industry for 16 years. She's been working ever since she was a child. So, her maturity level is way up there. I didn't start working 'til I was about [her] age now...She knows more about that aspect of life than me," Derek says admiringly of his lady love.