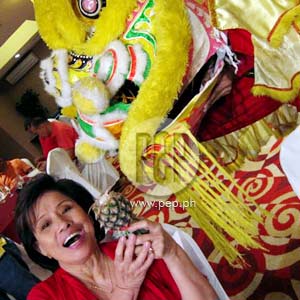 "I'm glad I was able to share this important Chinese tradition with the people who are close to me and my family," said Mother Lily.

The year of the metal tiger had an auspicious start at the Imperial Palace Suites when Mother Lily Monteverde hosted a well-attended Chinese New Year party last Sunday, February 14, complete with the rituals and traditional practices of the annual celebration.

Guests had the chance to enjoy the Chinese New Year ceremonies that started with the colorful and festive tiger dance. A makeshift Chinese altar was put up at the Imperial Palace lobby, with fruits, candies, flowers, Chinese delicacies, gifts, charms and crystals that have significant symbolism in welcoming the New Year and are believed to bring good fortune, happiness, and long life.

The night before the celebration, Mother Lily lighted candles and incense to ward off bad spirits and usher in prosperity. Keeping true to her Chinese lineage, she manages to bring together both Filipinos and Chinese to observe the important New Year season.

For the party, Mother Lily prepared a sumptuous lunch buffet consisting of popular Chinese dishes that guests feasted on. The hotel ballroom was also adorned with bright red trimmings and colorful lanterns to complement the joyful banquet.

Joining the Regal Films matriarch in entertaining the guests were her husband Remy Monteverde, daughter Roselle, sons Dondon and Winnie, as well as her grandchildren.

Most of the guests came in red, which is associated with the Chinese celebration, as well as Valentine's Day, which was also observed that day. The party likewise coincided with the 15th anniversary of the hotel.

"I'm glad I was able to share this important Chinese tradition with the people who are close to me and my family," said Mother Lily. "It's always a happy occasion to celebrate Chinese New Year. For me, it's a time of reunion and thanksgiving."