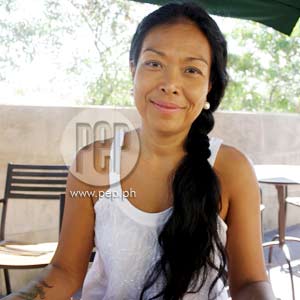 Marlene Aguilar, the mother of murder suspect Jason Ivler, said her nude photos are statements of her "freedom." "I'm a free person. I don't care. I live once. My life is mine. It has nothing to do with what they say. I will live and die. My honesty, my loyalty, is only to my soul. At the end of the day I will do what is right for my soul. And I will show half of my naked body to the world if I want to. I am not a slave by any structure: the soc

These days, Marlene Aguilar-Pollard spends her time basking in her own limelight. As the mother of murder suspect Jason Aguilar Ivler, she has shot up the headlines by her own accord—appearing in countless media interviews to drum up sympathy for her son, and to declare to the world that she and her family are victims of a conspiracy most foul.

On Friday, January 29, PEP (Philippine Entertainment Portal) sat with Marlene for an exclusive one-on-one interview, which PEP had a hard time scheduling. We had to send Marlene countless text messages before she agreed to talk to us.

"I live a quiet life," Marlene told us, as she sat cozily and sipped coffee at a Starbucks branch near Corinthian Gardens, Quezon City. Marlene, an artist, author, and singer, is not as popular as her brother, world-acclaimed folk singer Freddie Aguilar. Not until the National Bureau of Investigation (NBI) took her son away from her.

It seemed, however, that Marlene is now quite comfortable living under her new spotlight. In fact, she may be too adept in it—her tears, her smiles, and her little gestures felt perfectly timed with how she narrated the story of her life.

JASON'S ARREST. On January 18, elements of the National Bureau of Investigation (NBI) swarmed the house of Marlene Aguilar-Pollard in Blue Ridge A Subdivision in Quezon City. They were set to arrest Marlene's son Jason Ivler, a former U.S. marine who was wanted by the law for allegedly shooting to death Victor Ebarle Jr, son of a Malacañang official, last November in a road-rage killing incident.

SWAT was anticipating Jason to be heavily-armed. The 28-year old suspect had been evading the law for around three months. In several media interviews, Marlene said she did not know where her son is and that he probably had gone abroad.

When SWAT reached the basement of Marlene's 500-meter home, Jason greeted them with bullets. Jason was able to injure two NBI officers before he was taken down.

Jason is currently confined in QMMC. He already had undergone two operations. During the gunfight, his large intestine was hit, and feces spread to his stomach. QMMC doctors say Jason is "getting better."

The Quezon City Regional Trial Court has scheduled the arraignment for Jason's case on February 9.

STRONG EVIDENCE. Marlene told PEP that it's impossible to continue with the arraignment on the set date.

"How? He cannot even move. He's sedated. He can only move his left arm," she said. "What amazes me is doctors keep saying he's out of danger, he's getting better. But how can they say he's getting better when the first set of antibiotics they gave him did not work? That means we're starting all over again and they keep telling the public he's getting better."

Besides, Marlene added, Jason cannot possibly be guilty to murder charges even though the NBI presents strong evidence against him.

"He was at home that night when it happened," she stressed. Earlier this week, she told Unang Balita's Arnold Clavio that she suspects her British bodyguard Mark Hauser set up her son.

But the NBI said there is no evidence linking Hauser to the murder case. Lawyer Romulo Asis, executive officer of the Office of the Intelligence Services, said investigation was over and the case against Ivler had already been filed in court.

Evidence against Ivler, moreover, is "strong," according to NBI. Ballistics tests, for instance, confirm that the bullets that killed Ebarle match the guns that the NBI confiscated from Ivler.

GODS OF WAR. Marlene told PEP, however, that a larger conspiracy is involved in pinning her son to the murder charge. She believes the road-rage incident was perpetrated by a group of people she calls "gods of war."

These "gods of war," Marlene explained, is composed of "powerful elements" in America that control the Philippine government. Part of it are top American officials in the military, the CIA, and other institutions, she added.

This is who she had been fighting against "since childhood." Marlene calls herself a "warrior of heaven."

"Every president in the Philippines from the beginning of time, were blessed by the CIA okay? But somebody has to take a stand. In my book I discuss about, I'm fighting with the most powerful military men in the US," Marlene stressed.

In her book Warriors of Heaven, which she said was launched the day her son's alleged involvement in the murder case hit the headlines, she exposes these "gods of war" and vows to continue her fight against them for "a better Philippines."

"I wrote Warriors of Heaven to free my people from ignorance. I wrote this book so that my people could open their eyes to the sad truth, truth so needing to be found, the truth that successive governments of the Philippines, those governments that have been made up of colonial descendents, the patriarchs, the corporate and the corruptible of the Philippines are but the puppets of America. In addition, America must not only be the puppeteer of our government, but America must control and punish those who question. And this includes me," Marlene said in an essay she published on her personal website.

WARRIORS OF HEAVEN. Marlene said she raised Jason as a "warrior of heaven," just like herself.

Jason's alleged involvement in a murder case, Marlene added, is a "bargaining chip," a "chess piece," that threatens the "warriors of heaven" to back down from their fight against the "gods of war."

Before she continued, PEP asked Marlene how she stumbled upon her "gods of war" theory.

"I was damaged as a child," was her crisp answer. Marlene asked PEP not to publish the details of her own childhood.

SEEING THE FUTURE. Tragic circumstances in Marlene's childhood made her to what she is today: a "highly psychic" future savior of the Philippines.

Towards the end of our interview, she asked for our palm and then read our fortune, reading its lines and finger length.

She said she also has seen what will happen to the country in the next "200 years."

According to her, Buddhist oracles had predicted that she will be the Philippine's next savior.

"That's foretold 20 years ago that I will do something to free people from ignorance and suffering. And the old world will be destroyed and the new one will commend. The Philippines will be beautiful again," she said.

RAISING A WARRIOR. Like his mom Marlene, Jason's childhood was far from ordinary. In the interview, Marlene told PEP her son's childhood years were "very painful."

"His father died when he was two-and-a-half years old. His childhood years were very painful," she said. Marlene said her first husband, Robert Ivler, was found dead in a hotel in Bangkok due to drug overdose.

She suspects her husband was "murdered" by the "gods of war."

"CIA style 'yan e. Nakaupo ka lang wala na, overdose na. Later on, I asked the help of one of the most powerful, even today, politicians in the Philippines. I asked him to find out what happened to my husband. Months later he told me that my husband was murdered," she said.

From then on, Marlene said she had lived with a sword hanging over her head. Her two sons Colby and Jason lived under the same peril.

Marlene and her two sons shuttled back and forth between the U.S. and the Philippines, but the danger level is the same.

"Then I would say things to him like, 'Honey, if ever something bad happens to me, bad people walking in this house, I want you to hit the floor to the corner to hide. No matter what you hear, no matter what happens, be quiet. I will take care of myself,'" Marlene added.

UNUSUAL LOVE. Marlene said these conditions allowed her to feel a different love for her son.

"The greatest gift I have ever known in my life is Jason's pure love for me. I would never find another one like him. If I lose him any time, there will never be another one like Jason," she said.