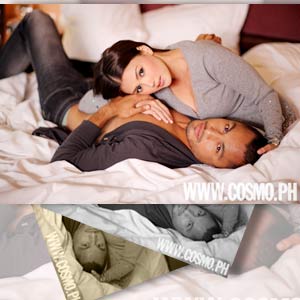 Visit Cosmo.ph to check out the behind-the-scenes photos from her February 2010 cover shoot and the fashion on the cover and in the magazine. Angelica also lets Cosmo.ph take a look inside her ba

It's not often that the name "Angelica Panganiban" is mentioned without "Derek Ramsay" following soon after. The three-year romance between the Rubi actress and her half-British actor boyfriend is always in the showbiz limelight, and Cosmopolitan Philippines talks to Angelica about the secret formula that makes their relationship work.

Her appearance on the February 2010 cover (a two-cover issue that features the couple on the back cover) is her third for Cosmo, and this time, she talks all about her man and what she loves most about him.

When asked about how they cope with the limelight, Angelica reveals that neither of them is the jealous type. "Alam niya lahat ng ginagawa ko, and ako din. Hindi kami yung strict na, 'Asan ka na, exact location please.' Hindi kami gan'on," she stresses.

Angelica says that Derek has no insecurities when it comes to her many admirers. "Confident siya sa sarili niya, so dedma siya," she says. She shares that they are unaffected by any showbiz intrigues that might surround them, and that if there is any jealousy, it's on a playful level. "Hindi kami umaabot sa point na kailangan niyang iwasan [ang taong] ito, o hindi niya gagawin itong project na 'to. No," Angelica says.

What keeps them together? "Friendship," says the 23-year-old actress. "Maganda sa amin, friends kasi kami." Angelica emphasizes that friendship is really the cornerstone of any relationship, and it is the secret behind her lasting romance with Derek.

She doesn't discount the possibility that a breakup can occur between couples who started out as real friends, though. "Kahit maghiwalay kayo, yung friendship ninyo nandoon pa rin, at yun ang importante," she explains

What has Angelica learned from being with Derek? "Kung papaano ko mahalin ang sarili ko," says the actress. "Dati lagi kong question yun. 'Bakit? Ba't hindi na lang yung iba, ibibigay ko na lang lagi sa iba. Yung point pala is, walang taong kaya magmahal sa akin kung hindi ko alam kung papaano ako dapat mahalin." Angelica says that it was only when she learned to love herself that she had an idea of how she would like to be treated by the person who loves her.