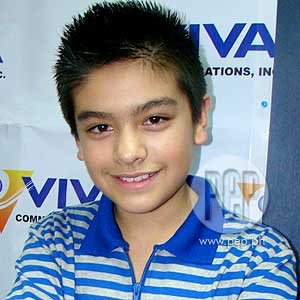 "I'd been eating a lot of Filipino food in England, so when I come over here, I'm not like scared to eat Filipino food," said 12-year-old Charlie Green about his favorite Filipino dishes. The half-British, half-Filipino singer is a former Britain's Got Talent contestant who recently signed a managerial and recording contract with Viva Entertainment.

At the contract-signing held yesterday, February 2, the former Britain's Got Talent contestant chatted with PEP (Philippine Entertainment Portal) and other invited guests about his career here in the Philippines.

Charlie, whose local showbiz career used to be handled by Star Magic, said it's been a while since Vincent "Vic" del Rosario had asked him to work with Viva.

"I had a good time [with Star Magic]. But something has changed over years so we decided to go with Viva. The contract with Star Records was only one year anyway, so it's either we stay or go to Viva."

Charlie, accompanied by his British father Roger Green, wanted to get the most out of his month-long visit to the country. So, when he arrived in the country four days ago, the young crooner went straight to his pictorial. Last Sunday, Jan. 31, he had a guest appearance on ASAP XV. His schedule for the next few weeks will be crammed with more TV appearances, concerts, and music recordings, which actually starts today.

Would Charlie be visiting the Philippines more often for his singing career here?

"Well, I'll be here a lot more," he told PEP. "I have a lot of things to do in England. I toured with Sarah [Geronimo] last year, so I went to America, Canada... so I was all around the world. It was quite nice, it's quite good, especially at my age. I'm really lucky and I'm so thankful that I was able to do those sort of things."

In a separate interview, Charlie's dad added, "We intend to buy a small condo, we're no rich people. So when we come over here, my wife can cook all the food that I like. That's the idea, to spend more time also here. It's difficult for us but we will be spending more time here."

Like any performer, the 12-year-old singer wants to make it big in the international music scene.

For the first time, Charlie will be celebrating his birthday in the Philippines on February 16. Would he also have the usual Pinoy grand celebration for his 13th birthday?

"It's probably gonna be quiet, calm because of that CD, so I don't wanna get to do much," he said. "I would just probably get my family here from the Philippines. It would probably be quite relaxing."

"LOVING THE PHILIPPINES." Since he first came to the Philippines in 2008, Charlie said that he has learned to love the country where his mother, Cecille Sumargo-Green, was born.

Charlie said that visiting the Philippines was one of the big changes that happened to him after Britain's Got Talent.

He recalled, "I think Sharon Cuneta saw me on her iPod and she showed it to Mr. Gabby Lopez [chairman of ABS-CBN]. She said, 'You have to bring him over here.' So, it just started from that and I had guesting on ASAP. I suppose coming to the Philippines is a little bit changing, [also] doing a CD with Viva and working with Christian de Walden."

As part of his plan to adapt to Pinoy culture, Charlie said he recently started to learn Tagalog.

He also pointed out, "I wanna learn more Tagalog first 'cause I think it's more important in my career here."

PINOY LIFESTYLE. Aside from the chicken adobo, monggo beans, and pancit that his mom prepares for them in England, Charlie also likes the "relaxed lifestyle" of Filipinos.

It seems that the young British singer has already learned what's commonly known as "Filipino time."

Charlie is also happy about his guest appearances on local TV shows, which, according to him, was quite hard in England.

"In fact, I'm doing a lot of TV stuff over here. In England, it's quite hard to get into TV, while I have ASAP every week here on a Sunday. In England, it's very rare to see a star on TV. In the Philippines, I like the fact that all the stars are always on TV and the people get to see them all the time. In England, we don't get that."

Charlie will be performing again on ASAP XV this Sunday, February 7. He will also have a series of concerts to promote his upcoming album under Viva Records. The venues of his shows are the following: Eastwood City, Quezon City on February 10; McKinley Hill, Taguig City on February 12; and Glorietta Mall on February 26.